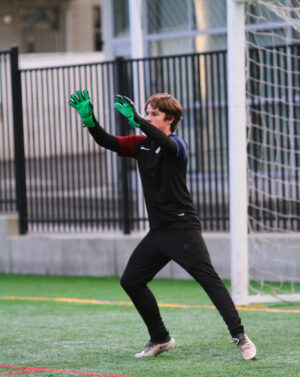 The team is still experiencing struggles a year after not winning a single game.

Last Friday’s 3-2 loss to Milpitas marked the boys’ varsity soccer team’s seventh consecutive loss since their sole 3-2 win against Cupertino on Dec. 18. The team is 0-6 in the Division 2 league and holds a 1-10 overall record. The coaches, Chris Stott and Alex Booth, are hoping to get more commitment and effort from players in the final weeks.

Toward the beginning of the season, the team was proud that they were able to compete with teams such as Leland, Leigh, Harker, Los Gatos and Cupertino in the higher division but have recently suffered a resounding 7-2 loss to Fremont. Senior left wing Brian Wu blames the loss to the absence of key players like junior strikers Fabian and Fernando Alvarado and sophomore left back Andrew Choi, due to travel and illness.

“We're getting better at working harder on the field and fighting for the ball, but we're still not making enough opportunities to score goals,” Wu said. “We aren't connecting as well as we would like and that leads to loss of chances to goals.”

Some players feel that showboating has distracted players from the ultimate goal of winning games.

“Our team just doesn’t give it their all,” Alvardo said. “Some players try to show off during games, which costs the team.”

For example, some players try to score on their own, while not passing to other teammates and losing the ball to the opposing team.

Additionally, Alvardo feels that instead of doing the fundamentals such as passing and controlling the pace of the game, players often try executing fancy technique and fail to communicate to teammates, resulting in breakdowns during games.

“The team overall has been getting better in each aspect,” Wu said. “We still have a lot to improve on in order to secure some wins this season.”

The Falcons are running out of chances to get another win, as they only have five conference games left. The team will play on Jan. 31 against Lynbrook, play at Monta Vista on Feb. 5, host Wilcox on Feb. 12, play at Milpitas on Feb. 14 and end the season by hosting Fremont on Feb. 19.