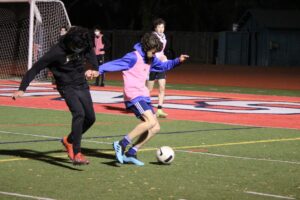 Sophomores Yuvraj Singh and Devon Wire have fun while practicing for an upcoming game.

As sophomore Nash Wu arrived at his last soccer game of the season against Wilcox on April 21, he felt both sadness and relief. Hearing the coach cheering up the team during warm-up, he was determined to win. Despite the team’s morale and competitive playstyle, they ended the game with a 6-1 loss.

“The game against Wilcox was hard,” Wu said. “Their players were stronger and faster than ours and generally seemed more experienced.”

Wu said although the season was exciting and brought a welcome change from the dullness of quarantine, he was happy to take a break from the constant practices and games.
“It’s good that I will finally be able to rest for a while,” Wu said. “Even though exercising and being outside was fun, practices became tiring and harder as the season progressed.”

After playing a shortened season with new coach Max Dorling, a SHS Class of 2012 alumnus, the boys’ soccer team overcame several challenges and ended with a 5-6 record in the El Camino division.

Dorling attributes the team’s success to the newly implemented drills and exercises aimed at improving performance in games, along with the players’ hard work throughout the season.

“The boys really gave their all,” Dorling said. “I think it shows that they’ve improved drastically given our 5-6 record this season.”

Dorling hopes to build on the momentum the team has gathered this season by continuing to implement his drills and improve fundamental skills to further the success of the team.

Since it was Dorling’s first year coaching at SHS, he was figuring out how to work with this group of players. However, with his seven years of previous coaching experience, Dorling took on the job with a positive attitude and believed that the challenges were ones he and the team could improve and evolve from.

“All in all, coaching was a great experience,” Dorling said. “This season was certainly full of [learning opportunities]. I learned that there are a ton of very [motivated] players from younger classes that we can build the team around next season.”

Because of the mixed game results of this season, Dorling said the team will work on being more consistent next year, with the main goal of improving performance and earning a better season record. Overall, Dorling said he was happy with the season’s outcome.

“I couldn’t be more proud of the work [the athletes] put in this season and how it went,” Dorling said.

For team captain senior Nolan Chen, the most difficult aspect of the season was the lack of connections between team members.

“Because of COVID-19 restrictions, we did not have a preseason, so [team] chemistry had to be developed during the actual games,” Chen said. “That was probably the hardest part, but we ended up all being really good friends once the season ended.”

Despite the strict pandemic guidelines and lack of CCS, Chen’s most cherished memories were from this season.

“Out of all four years this was probably my favorite season even though we had a shorter season and no CCS,” Chen said. “We had a [better] record this season so I was extremely happy with the results and everyone on the team was really supportive of one another.”