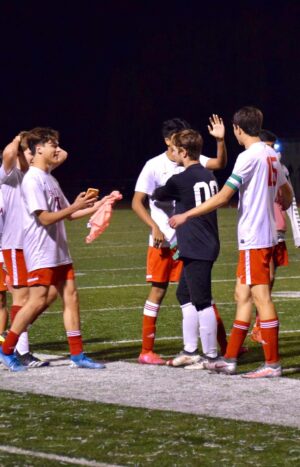 Saratoga and San Jose show sportsmanship after their match which the Falcons won 4-0.

Ten minutes before their first preseason match against San Jose High School on Nov. 30, senior center back and co-captain Aidan Costello looked proudly at his teammates on the varsity boys’ soccer team. The players had grown significantly since last season, with many players improving during their respective club seasons, but this was the first time the team played together this year.

“Once we started playing, we just absolutely dominated them.” Costello said. “We were stringing together passes really well and our team morale was good.”

As the game progressed, the team’s quality of play continuously increased. When the final whistle blew, the Falcons were up 4-0 with their first win of the season, with goals scored by sophomore Yul Hong, junior Taylor Wilson, and seniors Shaheen Masoumi and Nathan Glon.

Costello said the team was “hyped over their win,” and the victory boosted their confidence; they felt much more comfortable playing with each other by the end of the match. With San Jose being one of the stronger teams they will face this season, the win gave them a sense of where the team stood in terms of skill.

One of the factors in the team’s success were the new players who filled the spots of last year’s graduating seniors. Junior outside forwards Luke Wheeler and Wilson, as well as sophomore midfielder Mohit Gandluru, made significant contributions during the game.

Besides the strong new additions, the team remains largely unchanged since last year. This has allowed them to retain their chemistry, and dive straight into the season without having to adapt to a new style of play.

“The coach (Max Dorling) is the same and the team is the same, so we’re able to play together very well.” Costello said. “Our coach knows how good we are, so he’s there to push us to play to the level we should be at.”

The team hopes to continue their strong start throughout the season, and win the SVCAL El Camino League and punch their ticket to CCS.

“I’m excited for the upcoming season because I think all the other teams have dropped in level, but we’ve improved.” Costello said. “I think this is the year when we can win league and even CCS.”