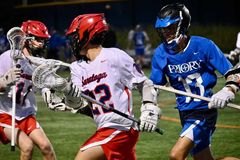 Photo by Amy Hawthorne
Senior midfield Nathan Zaragoza runs with the ball alongside senior Adam Weinstock, who rushes to guard him.

Permalink
The Falcons finished strong by boosting morale in between games and improving practice techniques.

With their 9-5 win against Priori High School on May 5, the boys’ lacrosse team ended their season with a league record of 12-4. They finished second in the El Camino division.

Although only seven of the 21 players on the team were underclassmen, senior captain and midfielder Kendal Jarvis is thankful for the current underclassmen vigor after seeing how much they have improved over the season.

“Having some of the underclassmen step up has been super helpful. Midfielders get super exhausted running back and forth,” Jarvis said.

The team faced a key loss when junior midfielder Mason Andrews injured his collarbone in a game against Pioneer High School on April 7. According to Jarvis, this injury affected the team greatly as Andrews always “brought a lot of intelligence and game IQ.”

On March 26 the Falcons won a sweeping victory of 16-3 against Hillsdale to mark their senior night. Seniors had a memorable night with a large turnout of parents and friends who showed up with posters and spirit.

Their first loss of the season was 13-5 against Carlmont High School on March 22, which ended their 5-game winning streak. According to senior midfielder and goalie Parsa Hashemi, the loss against Carlmont motivated the team to start taking practices more seriously in the second half of the season.

“The drills we performed had not changed, but the way we went about it did,” Hashemi said.

During the beginning of the season, practice quality was  low because opposing teams were viewed to be significantly weaker. Jarvis said the team had to increase their discipline and technique by having stricter practices.

Hashemi added that the team went through periods of uncertainty where they could not consistently win games.

“We have seen that [pattern] in games where we usually start slow. We need to face adversity in the beginning to reach our full potential,” Hashemi said.

This experience taught them that they all needed to stay focused both during and between matches.

Both Jarvis and Hashemi expressed pride at what the team accomplished throughout their season.

“It has definitely been our most successful season since we were freshmen,” Jarvis said. “I hope the tradition of success continues on when we are gone.”