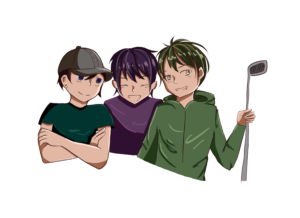 Senior Nathan Murthy’s favorite memory during his time on the boys’ golf team was getting poke as a team after games.

“We met at the high school to eat and roast each other about some of the bad shots we hit that round,” he said. “What’s great is that nobody feels bad when we talk trash to each other because it’s all in good fun and we are so close as a team.”

Murthy said the tight-knit nature of the team has continued this year and contributed to their success.

With 11 scheduled matches, the team is 7-0 with wins against Los Gatos, Los Altos, Gunn, Monta Vista, Cupertino and Palo Alto.

The six-member traveling team’s star players are seniors twins Geoffrey Jing and Albert Jing, both headed to Carleton College to play golf next year, and sophomore Howard Shu, who are ranked 9th, 7th and 5th in the league respectively. Other players include Murthy and seniors Kelly Huesby and Akshar Sarvesh.

Though the team has done well in games, they faced some challenges this year due to COVID-19; specifically, the condensed sports seasons, which resulted in less practice time for athletes. The structure of practices remained largely unaffected, as golf is a relatively low-risk sport, but the team has made changes to abide by COVID-19 guidelines such as maintaining a 6-foot distance and not touching flag pins or raking the bunkers.

The team’s practices and games are scheduled on weekdays Monday through Thursday, with two-hour practices on the days when there are no games. They start with a warm up, practice specific techniques, then go onto the course to play holes.

Worries over COVID-19 also caused the Santa Clara Valley Athletic League to withdraw teams from CCS (Central Coast Section). Citing a lack of school support for athletes as his main reason for leaving, senior Michael Burry, who will play at Emory University in the fall, chose not to return to the golf team. (SCVAL’s decision might be reversed in some Season 3 sports, but the league’s decision was not clear by the time The Falcon went to print.)

Coach Dave Gragnola noted that the SCVAL decision to withdraw from CCS has been difficult for the team.

“The five seniors will not get a chance as a team or individually to take advantage of their last opportunity to achieve their goals,” he said. “I hope a miracle occurs and action is taken to change this decision.”

Next year, the team will have to rebuild. The team has five seniors on the traveling team of six, so they will suffer big losses, Geoffrey said. Most of the team is confident in the team for this season, however.

“As of right now our league is not going to be participating in CCS, which is a shame because I feel our team could stand a good chance competing with others. Individually, I wanted to play, too,” he said. “On the bright side, our team overall has played consistently well; we are still undefeated right now and most likely placing first in the league.”