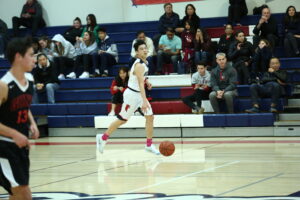 Recap: The team made it to the CCS semifinals but lost to Burlingame High School.

The boys’ basketball team opened the season with a 56-40 win against Aptos High School. The game started smoothly with the Falcons finding themselves up 27-16 by halftime. The game stayed in their favor in the later half of the game as well, with their biggest lead coming in the third quarter at 44-24. Key runs by Christian Li, who ended with 15 points and 3 3-pointers, and Som Teymori kept morale high, and the team finished satisfied with a 16-point lead.

Senior point guard Christopher Liu was happy with how the team played defensively but believes there is still room for improvement for the team to reach its maximum potential.

“We played well, but we haven’t unlocked our true potential yet,” Liu said. “But overall, I’m really happy with the way we played.”

Although the Falcons lost seven players to graduation, the team remains strong because the current lineup largely consists of seniors that share good team chemistry, with many having played together since middle school, power forward junior Mayson Yu said.

According to Liu, the team played 20 scrimmages against other schools in the area over the summer and only lost two. Both losses were against Los Altos, which is in the stronger De Anza league. Liu believes the team’s efforts over the pandemic strengthened them, as they continued practicing hard whereas “many other teams took it as an off year.”

“[During COVID-19], our coaches really united us through practices and group outings,” Liu said. “Even though we couldn’t play in the gym, we practiced together outdoors.”

Liu said the team is better set up than last year to win CCS due to members’ experience and the additional training.

“It’s something we’ve wanted to do for years now but have never been able to achieve, and I think we have a good shot [this year],” he said.