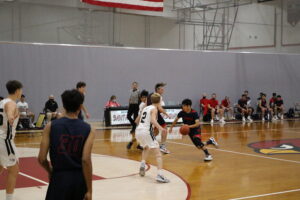 Junior Giulio Morini Biannzino sets a screen for senior Nathan Oh in a game against Santa Cruz on May 8. The Falcons ended up losing 53-37.

With year-round practices and workouts, the boys’ basketball team had hoped to go 12-0 record in the Santa Clara Valley El Camino Basketball League. To their disappointment, they had a rocky start with losses to Wilcox in their first two games.

Junior Ishaan Bhandari said their tactics weren't developed enough to achieve the goals they had set for themselves in the first week. Through adjusting their play after each game, Bhandari said the team was able to recover and are back on pace to have  a championship caliber season.

“Our two losses to Wilcox really fuelled us up because we ended up winning three games in a row,” junior point guard Chris Liu said. “Continuing off of our hot three-win-streak, we look to win the remaining seven games.”

As of May 14, they had a 4-3 record, with wins against Fremont, Gunn and Los Gatos and losses to Wilcox and Fremont. Top scorers are senior small forward Cameron King and junior shooting guard Som Teymouri. Due to COVID-19, the season has been condensed to six weeks.

The of COVID-19 restrictions have had a negative effect on team morale, players said. According to Bhandari, the environment of an outdoor practice, which the team had to do while training, is completely different compared to an indoor one, with the lack of spectators and different court feel being the main issues.

“I personally think having a large crowd plays a huge role in making the games fun, and the lack of it has made games feel kinda dead in a way,” Bhandari said.

Still, the team remains optimistic that they can finish the  season strong and possibly win the league title.

“It’s just great to be back on the court,” Liu said. “We are all lucky for this extra opportunity, especially the seniors who have been working for this moment their entire high school career.”