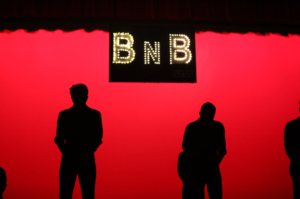 Junior boys arrive on stage in their starting positions awaiting the loud music.

Permalink
This school year, after many struggles, the show was able to be performed live with COVID-19 restrictions.

As the music faded at the conclusion of the show’s All-Male Dance (AMD), the final performance of the two-day-long Bombay in the Bay (BNB) performances spanning Feb. 18-19, dozens of performers piled together into a mosh pit to celebrate the finale. Many seniors were visibly emotional, knowing it was their last year dancing with their high school friends.

After two years of in-person absence due to the pandemic, students, parents and members of the wider Saratoga community were able to meet and engage with each other while immersing themselves in Indian culture at the McAfee Center. During BNB, dozens of Indian Cultural Awareness Club (ICAC) members performed songs and dances inspired by traditional Bollywood movies.

Despite initial talk of hosting the show as a drive-in event like last year, students were ultimately able to perform live to enthusiastic audiences.

Though all performers were required to wear masks, masks and vaccinations were recommended but not required for audience members.

According to ICAC officer Adithya Peruvemba, tickets for the event sold out quickly due to BNB’s annual popularity within the school and community. He noted that ticket availability was limited this year because each show held an audience at a reduced capacity of around 450 people compared to 550 in a normal year.

Each grade level hosted a boys, girls and co-ed dance. Specialty dances included Tamasha, Classical, Singing and Bhangra, along with the senior dances of AMD and All-Girls Dance (AGD). This year, AMD’s theme was Dude Perfect and AGD’s theme was Ocean’s 28.

The club raised around $15,000 through ticket sales. After settling expenses such as food trucks and equipment, around $13,000 will be donated to the Tamil Nadu Foundation, which works with children’s literacy programs in order to address South India’s lack of a stable education infrastructure, Peruvemba added.

Events leaders said the show was successful despite all the obstacles. Senior club officer Alaina Srivastav said that planning the show was initially stressful, but turned out to be a fun and enjoyable experience.

“Going into our role, all of the officers were a little shocked because an in-person BNB hadn’t happened in two years,” Srivastav said. “During the last month of the show, we were running around visiting various practices trying to make sure that everything was going smoothly, but it was a lot of fun.”

Similarly, Peruvemba recalled the difficulty of planning the large fundraiser and show, but ultimately felt he learned and grew during the process.

“I think all of the officers learned more about the planning process, especially how to run large events like BNB,” he said. “We learned how to communicate with different foundations and groups so that they can sponsor us, and learned fundamental skills like outreach, planning and even dancing. Overall, I think we did a great job.”

Srivastav recalled a sentimental moment that she shared with fellow senior officer Kavya Narayan during the AGD dance.

The officers agree that the most exciting part of BNB this year was that it was a live show. After last year’s non-traditional BNB show, Peruvemba and Srivastav both said they missed being able to dance to loud Bollywood music under the lights of the McAfee.

“After four years of hard work and improvement and a pandemic year where we all struggled to stay motivated, it’s fitting that we got our picture-perfect ending as seniors,” Peruvemba said.