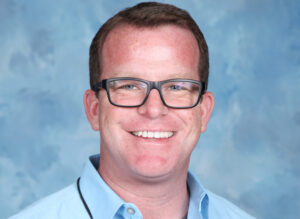 At the start of the spring semester, music director Michael Boitz returned to teaching after taking a paternity leave for the first semester. Boitz’s two children, fraternal twins Anthony and Thomas, were born this past August.

“We were trying to have one baby, and — surprise! — we have twins,” Boitz said. “It has been a pretty wild ride.”

Due to the pandemic, the music department’s biennial summer concert tour was canceled, but Boitz used the extra time to prepare his house for the babies.

“What I learned is that no matter how much preparation you do ahead of time, it’s not going to be enough,” Boitz said.

For Boitz, taking a leave of absence was a new experience. Boitz, who teaches the orchestra classes and has been at the school for 23 years, said this was the first break in his career and was glad to have taken the time off to be at home with the babies.

“I want to spend as much quality time with the babies as possible so that I’m continuing to watch as they learn and grow every day,” Boitz said. “They giggle and laugh so hard with me now, so when I get home and I start playing with them and making faces, they're just giggling and giggling.”

But his children have also kept him very busy, and having twins has made new fatherhood even more challenging.

“I’ve just been non-stop on the go. They're twin boys and they're awesome, but they’re rarely on the same cycle,” Boitz said. “While one wakes up because he needs a diaper change, the other one is sleeping, then that one falls asleep and the other one wakes up and is hungry.”

Although Boitz has a nanny to take care of the twins during the day, he finds it difficult to concentrate when working from his house.

To prepare a room for his children, Boitz sacrificed his home office and now uses his dining room table as a makeshift workspace.

“I can hear everything from that room,” Boitz said. “It’s become hard not to pay attention to what’s going on in the rest of the house.”

Most days, Boitz works from his office on the second floor of the music building on campus. Only Boitz and fellow music director Jason Shiuan frequent the building, so it is a quiet and COVID-safe space to work.

Boitz said that while the absence of live performances this year has made it difficult to measure students’ progress, he wants to make sure his students feel like they are on a trajectory and improving, regardless of their level of playing.

“I wanted to take this time to be home with the babies and it was worthwhile, but I really, really missed working with the high school kids,” Boitz said.