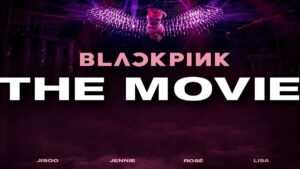 As I walked into the AMC movie theater on Aug. 6 to catch “BLACKPINK: THE MOVIE,” I was excited to see what the group had been up to in the past year. An hour and a half later, I left the theater with no regrets.

Released as a limited engagement movie on Aug. 4, “BLACKPINK: THE MOVIE” has already grossed over $4.8 million in over 100 territories, according to a report by Music Week.

Ever since their debut on Aug. 8, 2016, the Korean girl group Blackpink, consisting of members Jisoo, Jennie, Rosé and Lisa, has risen to fame for their charming and powerful hits including “DDU-DU DDU-DU” and “How You Like That.”

Now, they’re a household name in the Korean pop (K-pop) industry. For their fifth anniversary, they released “BLACKPINK: THE MOVIE” as a gift for fans.

Most of the movie consists of past performances of the group at concerts or dance practice rooms. There is some original content: usually, just short clips squeezed in between performances. They focus on the problems the group has faced as well as each member’s upbringing or feelings about the industry, like when Rosé talked about her passion for performing live in front of fans.

Even though the movie is open for everyone to see, it may not appease the general public or moviegoers who expect this to follow a stereotypical movie format with major plot points, conflicts and resolutions like “Black Widow” and “Jungle Cruise.”

Despite this, as a casual fan of Blackpink, I nonetheless enjoyed their powerful performances that are always filled with enthusiasm and energy. It was a wonder to see how well a group of people can bring out the crowd’s energy by displaying a chilling yet fire performance.

One performance I especially enjoyed was the somber execution of their song “Stay.” The somber tone of the performance fits in perfectly with a particularly emotional scene of the movie showing the group struggling with anxiety and stress after realizing their lives are changing due to their newfound popularity following their debut. The somber tone of the song highlights the immense pressure the members of Blackpink must face to become more successful and the emotional stress from receiving online hate in the process.

With that being said, “BLACKPINK: THE MOVIE” is a great experience for people involved with K-pop, from die-hard fans to casual enjoyers. For average moviegoers, however, it’s probably best to sit this one out.