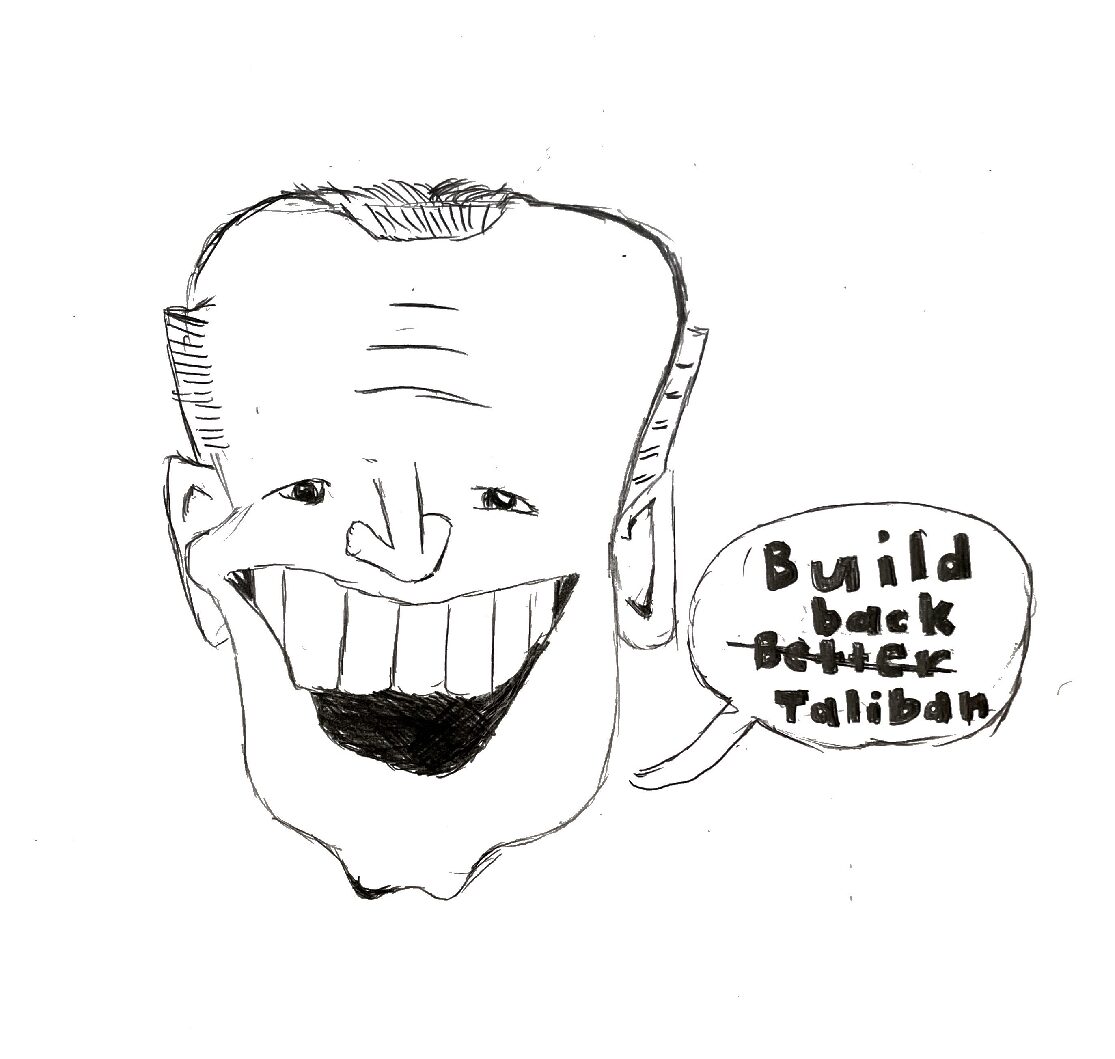 The fall of Afghanistan marks one of the greatest defeats of the United States during the 21st century. After 20 years of occupation and billions of dollars spent, Afghanistan has fallen back into Taliban control, with the future of the nation left in great uncertainty.

The Biden administration has undone years of work, remained negligent to the situation and left little to no support for the fractured nation. While it was necessary for America to leave the Middle East and return control to the people there in the process, this pullout was a miscalculation.

For one, Biden failed to properly support the Afghan government.

As the Taliban sweeps across Afghanistan at a record pace, the Afghan military has crumbled under unstoppable pressure.

Biden said he aimed to pull out of Afghanistan while leaving the Afghan forces well-supplied and ready to finish off the Taliban. Biden mentioned a formidable presence of 300,000 Afghan Commandos; however, the U.S. failed to supply the Afghan soldiers, rendering them unable to continue the fight. Biden described the operation as an “extraordinary success,” the polar opposite of the true outcome. His administration essentially ruined years of work in constructing the Afghan security apparatus.

According to US News, fewer than 1,400 military contractors remain in Afghanistan, compared to 2,850 in April. Furthermore, only 466 are serving roles where they are armed.

As the military was left stripped of all its core elements, the Taliban quickly filled the gaps, taking over hundreds of districts in a matter of time, cutting off access to Afghan holdouts, where their resources would eventually deplete and they would capitulate.

Additionally, the U.S. failed to construct a viable Afghan government.

The Afghan military took the brunt of the shock from this, wherein Kandahar, a major city in Afghanistan held sacred to the Taliban, whose roots began there, fell due to a lack of supplies — after weeks of intense fighting, the Kandahar police regiment’s rations narrowed down to a single box of slimy potatoes.

Hunger and fatigue had worn down Afghanistan’s soldiers, who were tirelessly fighting a cause that lacked the support to keep it burning.

So what could the U.S. have done? Throughout the Afghanistan campaign, the U.S. held air superiority, as the Taliban lacked the technological capability to hold a proper air force.

One strategy the U.S. could’ve employed was air resupplying. In numerous campaigns in the past, the U.S. has successfully resupplied friendly forces through airdrops. While the Taliban may have cut off supply routes on the ground, the air was left unopposed.

Additionally, the U.S. air capability was displayed at its fullest during the evacuation where over 122,000 people were successfully evacuated by Aug. 31, 2021, showing the effectiveness airpower possessed.

Secondly, the U.S. should have gradually pulled out allowing the Afghan government to adjust to the responsibility it needed to take on.

“We are drowning in corruption,” Abdul Haleem, a 38-year old-police officer on the front lines of Kandahar said in an interview with The New York Times.

Abdul’s special operations unit had dwindled down to 15 men from 30 men with depleting ammunition, left to fight the thousands of Taliban fighters.

So why exactly did Biden leave his trust in the Afghan government? Biden believed that the U.S. had done the brunt of the fighting already, and all that needed to be done was for the Afghan military to finish them off. To put it simply, he underestimated the Taliban greatly.

After the U.S. air offensive began in 2001, the Taliban was quickly fleshed out, and the threat started to dwindle.

However, as the U.S. then proceeded to focus resources on the ongoing war in Iraq in 2003, the Taliban began to steadily retake ground.

In 2009, President Obama redeployed tens of thousands of troops, hoping to eliminate the Taliban once and for all. Unfortunately, the Taliban’s war doctrine focused primarily on rural guerilla warfare, opposite the U.S. in utilizing the logistical and technological superiority that it possessed.

Eventually, the number of U.S. troops in Afghanistan began to dwindle, as most were sent home. The objective shifted from combat to support, aiding the Afghanistan government and military into taking the fight completely into their hands.

Billions of dollars of resources were poured into building a world-class military for Afghanistan. However, a large portion of the resources was centered in urban areas, again, opposite of where the Taliban were holding out, in rural areas.

Biden neglected this factor, only looking at the numbers where it appeared the Afghan military would steamroll the Taliban with its technological superiority.

As the U.S. began its withdrawal, the Taliban quickly gained ground around major cities, cutting off supply lines and gradually wearing the defending forces down.

Furthermore, Biden neglected the morale and condition of the Afghan forces, who were exhausted and broken, many of them deserting and switching sides, whereas the Taliban was devoted and united, psychologically defeating the Afghan military.

The Taliban lacked the capability to wage a conventional war against the Afghan forces, lacking the firepower needed to fight head-on with the U.S. Thus, the Taliban operated remotely and seized around 50 percent of territory in the past few years without directional confrontation.

Added on with corruption within the Afghan government, many simply surrendered without a fight. Biden’s failure to come face to face with the truth and to reinforce confidence within the ranks of the Afghan military tore Afghanistan apart from the inside.

One key element that holds across all reasons for failure is time. Despite there being no rush, Biden allocated a mere five months to withdraw forces, and toss responsibility to a fractured nation. Had he extended the timeline for a few more months, say till Christmas, more time could have been allocated to fix the broken government and aid the military.

One solution to these failures would simply be to extend the timeline and create proper contingency plans in preparation for possible situations. The greatest enemy to the U.S. was time. In a short period of four months, 20 years of work was uprooted, spawning a myriad of issues to deal with.

If say eight to 12 months were allocated to a proper withdrawal, the U.S. would be in a better position to orchestrate a calculated extraction, ensuring stability within the Afghan government and keeping the door open for supplies, allowing them to gradually fight off the Taliban.

As an analogy, imagine a surgeon being allocated 10 minutes to extract a brain tumor instead of the average three to five hours. Obviously, the surgery would not be very successful.

Now, the Taliban quickly realized that Biden’s rushed withdrawal was an open door for them to Kabul. As the Taliban rapidly made gains, Biden lacked a contingency plan, allowing the Taliban to tear through the Afghan forces.

While the future of Afghanistan lies in uncertainty, it is clear that the failure of the U.S. to orchestrate a calculated departure from Afghanistan has been, to put it simply, an extraordinary failure.