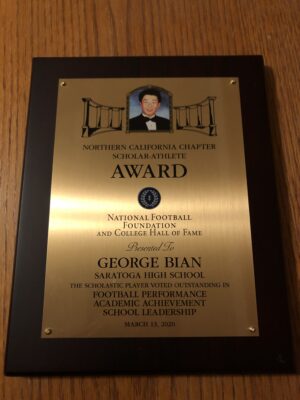 Earlier this month, the National Football Foundation awarded one of 23 NorCal Scholar athlete scholarships to senior George Bian, an award granting football players across 32 regions in California $1,000 for college. It has been awarded to outstanding high school athletes for the past 60 years.

“School football has undoubtedly shaped my path into adulthood,” said Bian. “It has brought me valuable lessons on what it means not just to be a successful scholar or athlete, but a successful member of the community around me.”

When the scholarship came to the attention of athletics director Tim Lugo, he had little hesitation to nominate Bian for it.

“These are not well-known scholarship opportunities,” said Lugo. “Each school is allowed to nominate one skill player and one lineman, and the decision to choose George was easy.”

Bian believes the award is a result of his work ethic and leadership in the team, and having come far from the beginning of his football career.

“It makes me more proud of my accomplishment in football,” Bian said. “It speaks a lot on behalf of my work in the sports community rather than just my work in football.”

During the selection process in which coaches were asked to look for exceptional players with good character and academic achievement, Bian’s name was instantly a frontrunner.

“The award really wants to recognize really talented Football players, who are also strong students,” Lugo said. “George totally and completely meets those criteria, as an outstanding football player and an even better person.”

Bian thinks the award offers some consolation following what he called a disappointing final season, where he felt he could have been used more and done more.

“At first I felt like I put more work into football than I got out in terms of achievement,” he said. “But then I realized that it’s not all about that, and it’s more than just about you in every aspect.”