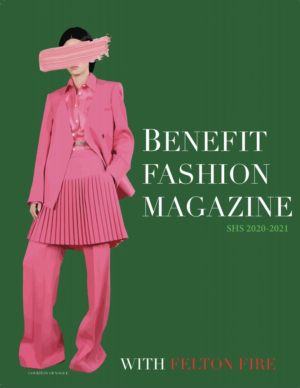 Photo by Grace Hsu
The 83 page Benefit fashion magazine has ten different themes, including “Vintage,” “Rally” and “Design Your Own.”

“I felt so incredibly happy looking at the final product,” Hsu said. “I was so proud to see how it turned out, especially since Benefit has never done a magazine before.”

Due to the pandemic, the Benefit commissioners were unable to host the usual fashion show in the Large Gym. Instead, the commission turned to a magazine format to preserve the fashion element of the fundraiser.

Benefit received 101 preorders of the magazine and sold around 10 additional magazines upfront. Magazines were distributed after school outside the McAfee Center on May 5-7.

In total, the commission raised around $1,000 compared to last year’s total of $8,000, all of which will be donated to the Felton Fire Protection District in Felton. The organization was chosen because of its dedication to fighting the large-scale fires in the Santa Cruz Mountains last August.

The magazine is organized across 10 themes, such as “Vintage,” “Rally” and “Design Your Own,” each one with a unified cover page in the magazine. The editing team chose to use a green and pink color theme across the cover and on the first and last few pages to tie the magazine together.

The finished product is 83 pages, with each inside page showcasing one of the 81 student models across all grade levels.

“A really memorable part of having a magazine is that students will have  a physical reminder of their time modeling in Benefit that they can look back on, even though we didn’t get to have an actual show,” Chen said.

Students signed up in October through a Google form that was posted on the school FaceBook group and the Benefit Instagram page. The commission relied on these social media platforms as well as the school-wide Canvas messenger system to reach parents and students.

Hsu said communicating with the models was surprisingly easy. Student models took their own portraits and were asked to share the photos via Google Drive by certain deadlines, and the editing team took it from there.

Still, some students who signed up to be models ended up not turning in photos, which forced the commission to make adjustments.

According to Hsu, the process of putting the magazine together was time-consuming and somewhat stressful. The editing team, which consisted of Benefit commissioners Hsu, Lee and junior Tiffany Wang, spent over a month editing the spreads and working to make the designs look as clean and professional as possible.

Another challenge they faced was fundraising. Unlike previous years, when the Benefit commission raised most of its money through ticket sales to the fashion show, this year’s budget came purely from the magazine profits and the silent auction, which offered items including jewelry, salon services and themed gift packages.

Chen said that due to the pandemic, it was more difficult for Benefit to secure donations for the silent auction. Many stores were hit hard by the decline in retail, so they were unable to donate items this year. Ultimately, however, Benefit received generous donations from stores including Kendra Scott, Lolli and Pops, Studio Kicks and La Bella Nails.

Although the commission did not raise as much money as it had in previous years, Chen felt that this year’s Benefit event could be considered a success.

“My biggest takeaway from Benefit was learning to collaborate and communicate with so many different people, from other commissioners to models to store managers to the school administration, toward a common goal: raising money for charity,” Chen said.