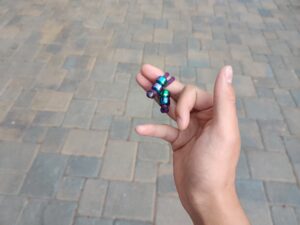 A two finger wrap-around in mid-grip performed on the aroundsquare mini sigma begleri.

Two beads and a string turns out to make for a great fidget toy.

“What’s that clicking sound that keeps coming through your mic?” my friend asked me while on a recent Discord call.

“Oh, it’s just this little fidget toy that I got,” I replied.

With the flurry of finals and AP testing at the time, I was in desperate need of a new way to fidget and relieve stress. Perfect timing too, since while watching a Twitch streamer by the name of TheAlbertChang, I had just discovered a toy called a begleri.

A begleri consists of two beads at the ends of a string that can be flipped between the fingers. It originated from Greece and derived from kolomboi beads, which are a string of beads that resemble prayer beads, but are often flipped with the fingers to keep the hands busy. Begleri beads are threaded on an open string, and, in recent years, have evolved to be more of a skill toy and an everyday carry item.

Because of how simple it is, the cost ranges dramatically. You can make one at home for virtually no cost, or you can find beads made of expensive, high quality materials that can cost hundreds.

On a whim, I asked my friends for a cheap begleri from aroundsquare.com for my birthday.

To my surprise, they also bought me a titanium multi-bead set, which is actually quite expensive. They chose anodized beads with a beautiful blue and green multicolored pattern, which I absolutely loved.

I couldn’t wait to set up the begleri and start slinging. Included were the four titanium beads, which would be used with two beads on each end; different color paracords and some simple instructions to get started. For my first time flipping, I chose to use the cord that I liked the second-best, so that I could save the better string for when I felt more comfortable with my skills.

At first, slinging and letting it wrap around my fingers felt awkward and jerky, and it wasn’t uncommon for the whole thing to fly out of my hands. But after about 10 minutes of practice, I began to better understand the momentum of the beads, and was able to smoothly and consistently wrap the string around my index and middle fingers.

Even though it was the simplest trick, I found it so fun to do it over and over again. It was so satisfying to feel the rope wrap around my fingers, bounce back and wrap the other way around. It’s decently quiet and small, making a satisfying “click” everytime it bounces off my fingers. Sometimes I gather all four beads on one end of the string and let them fall one by one, which makes a pitter-patter noise that resembles raindrops.

The small size makes it much easier to use than a butterfly knife, which I’ve tried in the past. After learning a few more techniques, rebounds and slips, slinging now had more variation, was more aesthetically pleasing and even made room for some freestyling.

So far, I absolutely love my belgeri. I can sling it while I’m watching YouTube to keep my hands busy, or I can sling it to clear my mind. I enjoy learning difficult tricks, but I also have fun doing the same old tricks over and over again.

Though the one I received is premium, you can tie two metal nuts to the ends of a string and sling it around like a begleri. The simplicity of it is truly elegant, which is also why I love it so much.

Once spinning pens and toying with fidget spinners get boring, try a begleri; their versatility and bang-for-your-buck will have you spinning.