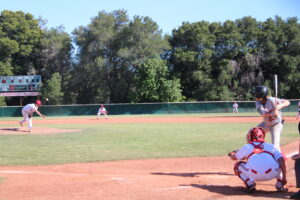 Photo by Andrew Lin
Junior shortstop and pitcher Lucas Dennis throws a pitch during the last game of the regular season on May 12 against Fremont.

ccs baseball, spring season
The team went on their win streak following a change in head coach from Jason Bugg to Travis Cheney. During the streak, junior shortstop and pitcher Lucas Dennis threw no-hitters in back to back starts.

In the May 12 win against Fremont and the May 5 win against Lynbrook, junior shortstop and pitcher Lucas Dennis threw consecutive no hitters. It is an incredibly rare accomplishment, as back to back no hitter games have only been thrown once in Major League Baseball (MLB) history.

Dennis also had a highlight play in the May 12 win over Fremont in the sixth inning when he flipped a ground ball between first base and the pitching mound to first base from his knees to get an out.

After his first no-hitter, Dennis came in second in the Bay Area News Group athlete of the week voting for May 2-8. Following his second no hitter, Dennis won the vote for May 9-15 by a large margin.

He also won Cal-Hi NorCal Baseball Player of the Week, was first team all-league and was second in MVP voting for the league.

“The no hitter games are definitely one of the best experiences of my baseball career and my life,” Dennis said. “I’m just at a loss for words. It’s definitely something that I never imagined would happen.”

He said he was “pitching to contact” more during the two games, which helped him be more efficient. The team was overjoyed with Dennis’s achievement and have been becoming more tight-knit through the past few weeks, Dennis said.

“My teammates are all super supportive,” Dennis said. “I love my guys. They brought the energy these past couple weeks, and it was really starting to feel like a family.”

The team developed great chemistry and trust in each other even with several new faces on the team, including coaching changes through the season. Jason Bugg was a new head coach for the team at the start of the season, but on May 4, he resigned from the position for personal reasons. Travis Cheney, the assistant coach, then became the new head coach.

“I think the change of head coach [to Cheney] was huge for us,” Dennis said. “He kind of unlocked a lot of players who were thinking too much kind of about what they were doing.”

The team went on the three-game win streak to end the season right after the coaching change, and Dennis attributes some of that success to Cheney encouraging the team to play with all of their skills and trust their instincts.

“Honestly, I don’t think the no-hitters that I threw would have been possible without the freedom that [Cheney] has given us,” Dennis said.

The two wins against Fremont at the end of the season were crucial for the team making CCS. Before the two games, Saratoga was third in the division with a record of 7-6 and Fremont was second with a record of 8-5.

The top two teams in the division make CCS, so the Falcons’ clutch final two wins lifted them above Fremont to claim second place. The team had been locked in a tight race for second with Milpitas and Fremont throughout the season.

Going into the final game against Fremont, Dennis said the team was focused because it was what they had been working towards all season.

“Our goal was to make CCS in any way possible,” Dennis said. “It all came down to that game.”

They had been putting in a lot of preparation and also knew that Fremont was going to be at a disadvantage because they threw their best pitcher in the game two days prior on May 10 and were low on pitchers.

“They didn’t have all of their guys that they needed to stay in the game, so we just had to do our thing and stay solid, and that’s what we did,” Dennis said.

The team’s senior night on May 3 resulted in a 6-2 loss to Lynbrook. Despite the loss, Dennis believed it was still a great senior night. They had a ceremony after the game in which an announcer read statements from each of the players and had parents throw pitches to their players.

“I thought [senior night] went really well,” Dennis said. “The game didn’t go how we wanted it to go, but I thought it was a really good night for our seniors.”

In the games prior to the team’s three game win streak, Dennis said one of the biggest highlights of the year was a close win on March 26 against Gunn, the top ranked team in the division which finished the season 14-1.

The team’s win against Milpitas on March 22 was also commendable since they won on a walk off in the eight inning, meaning they ended the game by generating enough runs to exceed the opponent’s score in the bottom of the last inning of the game. They scored a run for the win after junior outfielder and catcher Max Timmons hit a “sacrifice fly” to right field, allowing a runner on base to score.

Dennis believes Bettinger has significantly stepped up over the course of the season and been a huge addition that many team members did not expect.

Freshmen outfielder and pitcher Aiden Chen and utility player and pitcher Samanyu Ram have also been huge for the team. Ram was pulled up to varsity for the last two league games and provided a great offensive spark for the team, Dennis said.

Going into CCS, the team is feeling good and hoping to maintain their momentum from the win streak. They play Thomas More in the first round of CCS at home on May 21.

“We’re hot right now. I don’t think any team that we can be matched up against and CCS is going to be comfortable with playing us,” Dennis said. “We’re super confident right now.”