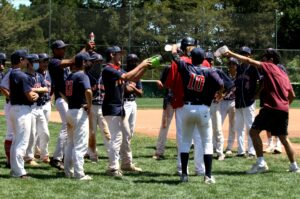 The team celebrates after a 10-3 win against Mona Vista.

During the baseball team’s first non-conference game vs. Santa Clara on April 21, senior infielder Ryan Gilligan smacked a triple in his second at bat. After more than a year without paying high school baseball, it brought home for him the sweet feeling of playing the game again.

The baseball team is scheduled to play 15 conference games this season. As of May 13, the Falcons have a 3-5 league record, with wins against Monta Vista, Lynbrook and Gunn and losses to Gunn, Milpitas and Fremont. Their final game will be against Lynbrook on May 27.

Due to COVID-19 concerns and the decreasing school enrollment, the baseball roster is smaller than previous years; varsity has 21 players and there is no JV team.

The team is led by coaches Sean Hodson and Craig Walsh, and captained by Gilligan and senior infielder and pitcher Philbert Fan.

Gilligan said although it has been hard to hang out with his teammates outside of practice due to pandemic restrictions, they have fun during practices and games. He said he’s particularly enjoyed freestyle rapping with his teammates between drills or at other free moments.

Gilligan’s major goal this season is to get through it healthy. He has been experiencing arm pain from the quick transition between sports seasons — he also plays football and usually has time to build up his arm strength prior to baseball — but is alleviating the physical strain by stretching more before games and practices.

Senior outfielder Neil Shah said his favorite part of the season so far has been bonding with his teammates in the dugout.

“I think this team especially has a great dynamic, and the relationships built — even between the seniors and freshmen — are great,” Shah said.

The team had just one week of practices prior to games beginning, so they were not in great physical shape, Shah said. Because of this, he thinks the team’s first few losses don’t reflect the team’s abilities and he isn’t worried about their performance. Now that the team has had time to correct their mistakes, players have been improving to the tune of a 10-run win against Lynbrook on May 8 (16-6) instead of jaw-dropping losses. (The Falcons fell to Mountain View on April 22 by the score of 21-1, and lost to Los Altos 31-1 the next day.)

Sophomore infielder Lucas Dennis found the lopsided early-season losses to be frustrating. As a club baseball player, he said competing and winning are some of his main motivations, so he hopes the team can fight back to win a league championship.

“My goal is to help rebuild team dynamics to where we left off last year,” Dennis said. “If we can get guys to buy into the process and work hard, I think we can be really successful.”

Regardless of the team’s success so far, the athletes share a collective sense of gratitude to be back.

“I’ve been really enjoying playing games again and being able to work hard while having fun with my team,” Lee said. “It feels great to play baseball again.”