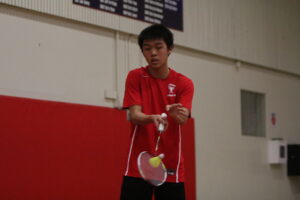 After an exhausting battle against Milpitas on April 29, the badminton team emerged victorious with a close 16-14 win. As of May 1, the Falcons have a record of 5-2 and in sixth place in the SCVAL A league. “It was a good win because we were missing our coach,” sophomore Michael Owyang said. “Three of our No. 1 seeds won, which ultimately won us the game.” Despite this win, the team is winning fewer games than in previous seasons, suffering a 18-12 loss against Gunn on April 17 and a 16-14 loss against Palo Alto on April 15. Assistant coach Chris Do attributes these losses to the lineup rather than the players themselves and plan to adjust accordingly to ensure a successful remainder of the season. “I think that if we had been smarter about where we placed our players throughout the season, we would have won more of our games,” Do said. “Our players are strong, but sometimes we place them in the wrong spots.” In addition, the team is taking its opponents into consideration when assigning the lineups. “We adjust our lineups slightly to accommodate each school we play against so that allows us to best utilize our players and be able to see what we’re most likely to win, most likely to lose and what we should focus on,” said senior captain Allison Chang. Strong players are becoming evident as the season approaches varsity league finals. With graduation approaching, they will be expected to continue carrying on the team. “[Freshman] Josh Li is a very versatile player. He plays all three events and he does really well in all of them,” Chang said. “I definitely see him becoming a new pillar for the team after [Owyang] leaves.” Girls doubles and singles are thriving especially with additions like freshmen Spring Ma and Megan Fung. “[Ma] and [Fung] are really flexible players and that allows us to shift [the lineup] accordingly this year, which is really nice,” Chang said. For the remainder of the season, the team is focusing on improving their teamwork. According to Chang, the new teamwork based mindset will prove to be vital for future games. “When we don’t have as many strong individual players, [we] have to rely on strategy and brains and not just pure strength,” Chang said. Badminton is easily categorized as an individual sport, but this season the team is emphasizing the community aspect. “A lot of players are stepping up — they help train people, drill people, help feed people birds,” said senior captain Matthew Lee. “I think our team attitude and cohesiveness is a lot better.” This new mindset will not only be crucial for the Falcons throughout the rest of the season, but also for seasons to come. “It sounds really simple but its a big change in mindset,” Lee said. “I think we’re establishing things that will be there for the future.” The team’s next match is at Monta Vista on May 13.