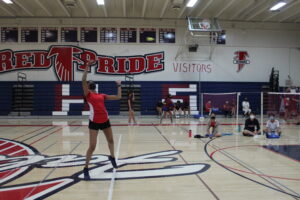 Sannidhi Boppana plays badminton at a home game against Cupertino on March 31.

Permalink
With 24 new freshmen players this season, the badminton team is working on team bonding and improvement of skills

On March 31, the Falcons fell 16-14 to Cupertino, marking their fifth loss of the season.

Though the team wins have been rare this spring, individuals like sophomore singles player Sannidhi Boppana, a team captain and badminton veteran, have been teaching younger players how to play the game.

With 24 new freshmen players, she and the other captains work to help players improve their technique, form and agility through drills.

The team has also seen a record high in the number of girls joining, making it more well-rounded and diverse compared to previous years, according to junior captain Jason Liu. As a result, head coach John Li is focusing on team bonding to form closer relationships with each other.

At the beginning of the season, players sat around a circle and introduced their interests and background. During practice, Li randomly pairs players up to practice in doubles to help players get to know each other.

“We’re pretty close with the coach and he treats us very respectfully,” Liu said. “He just wants us to have fun so we can work well together.”

The team holds a 2-5 record as of April 1, winning against Los Gatos and Gunn , but losing to Monta Vista , Lynbrook , Milpitas, Wilcox, and Cupertino. The team plays rematches against  Lynbrook on April 5 and Wilcox on April 21.

The team has seen progress in recent games.

“All our games have been pretty close recently,” Liu said. “We were losing quite a bit, but we’re hoping to make a comeback.”