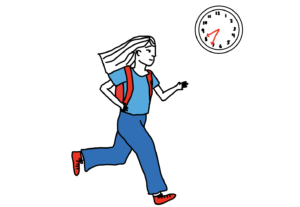 Photo by Anamika Anand
Students run towards their designated class, knowing that they are late.

Permalink
Nearly 1 in 10 students had at least 5 tardies in the first semester.

Junior Ameya Saund often wakes up at 6 a.m. to complete homework assignments due later that day, as a result of her excessive workload the night before. However, she often realizes that she does not have enough time to finish her work and arrive to first or second period on time, so she usually opts to arrive around five minutes late to class.

For Saund, being constantly tardy has been the norm since sophomore year — she is not alone: According to assistant principal Brian Thompson, as of early December, nearly 10% of the school — a total of 156 students — had racked up at least five tardies in a class.

Thompson attributes the school’s prominent tardy issue in recent years to students continuing to readjust to the routine of in-person school. To combat tardiness, the school has implemented “Treasure Toga” for the second year in a row, a program in which students with more than five tardies can subtract three tardies from their count by completing roughly one hour of community service work around campus such as raking leaves and picking up trash.

Students who do not show up are required to attend Saturday school. To further motivate students, the administration announced that students who have over 13 tardies are not allowed to go to prom. But the disciplinary measures aren’t having much effect on repeat offenders like Saund.

“For me, Treasure Toga does not discourage me from being tardy,” Saund said. “The number of tardies that I have does not have any effect on my transcripts, as it only affects whether I can go to prom or not.”

Additionally, for students who are persistently tardy for two weeks straight next semester, Thompson or assistant principal Matthew Torrens will schedule meetings with the student and their parents to better understand circumstances leading to frequent tardiness, hopefully helping combat the underlying causes.

Saund feels that her chronic lateness is caused by her choice to take a rigorous academic schedule consisting of four AP and three Honors courses. Because she also strives to sleep before midnight to maintain good health, Saund has less time to complete all of her assignments, resulting in her needing to be more efficient with the time she has available.

“Doing several rigorous classes is extremely exhausting, as it creates an unhealthy amount of stress,” Saund said. “I have less time to hang out with friends and I can not afford to procrastinate.”

Junior Edmond Hsu, who has also struggled with arriving to class on time, attributes his tardiness to a common culprit: procrastination.

Though Hsu knows he should not waste his time during school days, he often finds himself procrastinating for at least an hour every day by playing video games and browsing YouTube. As a result, he typically sleeps at around 1:30 a.m. and wakes up only 10 to 15 minutes before school begins.

Without enough time to complete his morning routine of eating breakfast, packing his school supplies and bike to school, Hsu often ends up three to five minutes tardy — which hurts both his attendance and his state of mind, especially on days when he has a test.

“The breathing routine that I enjoy going through to calm my nerves for assessments involves taking several deep breaths,” Hsu said. “However, when I am tardy, I do not have enough time to go through this routine before the assessment.”

On the other hand, senior Haley Marks attributes her tardiness to her having to drive 15 to 20 minutes to school; she lives in San Jose and commutes to school in Saratoga because her parents are teachers at schools in the Saratoga Union School District (SUSD).

Additionally, Marks does not think of herself as a morning person. She tends to have difficulty waking up after her alarm goes off, falling back to sleep.

However, the school’s current tardy issue is also made more prominent by the students who are tardy to fifth and sixth period, which include senior Kian Teymouri. Since Teymouri strongly dislikes school lunch, he frequently goes off-campus to nearby restaurants to eat lunch, which include McDonald’s and Taco Bell.

Consequently, he is usually two to three minutes tardy around three times a week to the classes that he has after lunch. Teymouri has noticed the negative effects of persistent tardiness on his learning.

“Showing up late feels disrespectful to the teachers, making it harder for me to develop good relationships with my teachers,” Teymouri said. “It also takes me longer to get on track with what my class is doing and stay on track because I did not hear some of my teacher’s instructions.”

But not everyone is late and, for some, the administration’s threat of discipline is more than effective. Senior Mason Wang, who is always on time to class, said he is mainly incentivized by Treasure Toga to arrive on time to class. In order to maintain punctuality, he usually sleeps just before midnight and wakes up at 7 a.m.

Wang has noticed that practicing better sleeping habits has improved his overall health and also helps him maintain adequate relationships with his teachers, as teachers tend to like punctual students more than tardy students.

“Getting on time to class is not hard to do,” Wang said. “Just force yourself to get into the habits of punctuality and focus on maintaining them.”