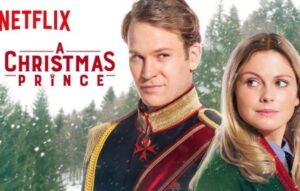 When the holiday season begins, my mom and I get into the Christmas spirit by searching for Christmas movies on Netflix and choosing the one with the most ridiculous plot summary.

All of these movies have a similar plot: The main character tries to turn their life or town around and inevitably finds love along the way, and for some reason, almost half of these films seem to have Jonathan Bennett in it, who played Aaron Samuels in “Mean Girls.”

Somehow, they just fit the joyful and magic-filled Christmas spirit. You get to turn your brain off, grab a mug of hot cocoa and laugh at the movies’ ridiculousness with the people you love.

From “A Dogwalker’s Christmas Tale” to “A Christmas Crush,” I’ve watched them all, so I think I’m certified in telling you two Christmas movies that are so bad that they’re amazing.

First up is “The Princess Switch.” Starring Vanessa Hudgens, this movie made fans assume Hudgens was going to become the new Jonathan Bennett — so desperate in her career that she had to turn to Christmas movies. To everyone’s surprise, the movie  surpassed low expectations.

The movie itself is like “The Parent Trap” meets Christmas, with Hudgens playing both a baker from Chicago and a princess from the fictional country Belgravia who meet and plan to switch lives for two days. Things get complicated, however, when they find love along the way.

This concept of having one person play two roles hasn’t been explored in the Christmas genre before, and the audience gets more bang for their buck with two love stories instead of one.

While there was some questionable  comedy and debatable acting, it was somewhat heartwarming to see the princess feel what it is like to live a normal life and watch the baker live out her childhood dream of being a princess. The movie also featured cute moments like baking cookies with children and handing out toys in an orphanage that just warm you up from the inside like some hot peppermint cocoa.

Fans actually enjoyed this movie so much that Netflix released a sequel, “A Princess Switch: Switched Again.” Honestly, whoever is coming up with these movie names needs a raise.

Netflix even went out of its way to tweet, “To the 53 people who can’t stop watching ‘A Christmas Prince,’ who hurt you?”

The story of “A Christmas Prince” revolves around a journalist named Amber who travels abroad to get the inside scoop on a prince of made-up Aldovia because he is going to become king. Needless to say, after multiple scenes of accidentally falling into each other’s arms, they eventually fall in love because of the Christmas magic in the air.

This movie reaches the top of my list because it somewhat breaks away from the bad romance genre by developing its characters a bit more, which is uncommon in these types of films. Viewers see, for example, the prince growing through his relationship with his parents and Amber maturing as an independent journalist.

At the end of the day, bad Christmas movies work because of the laughter and comfort they seem to bring into the room. Even months or years after you watch them, you’ll be laughing to yourself about how fantastically absurd they were, and isn’t that what Christmas is all about?