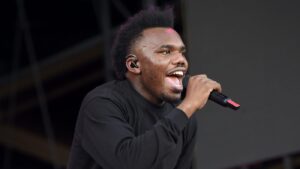 When Baby Keem and Kendrick Lamar’s rap phrase, “top of the mornin’” leaked to the public on Sept. 9 with no context, fans went ballistic deciphering its seemingly meaningless point. Only one day later, Baby Keem dropped his sophomore album “The Melodic Blue,” blasting listeners with crazy, chaotic songs.

Baby Keem has garnered many fans this year because of the uniqueness of his music, highlighted by spontaneous beat changes, and his uniquely high-pitched voice. Keem’s cousin is Kendrick Lamar, a quintessential rapper who was  featured on Melodic Blue’s acclaimed single “family ties” as well as “range brothers.” The songs piqued the interest of the rap community, especially after Lamar’s hiatus, and received very positive feedback, earning Keem a launchpad to potential rap stardom.

Fans had especially high hopes for Baby Keem, especially after the release of “family ties” on Aug. 26 and his powerful feature on Kanye West’s latest album “Donda.” Needless to say, he exceeded them.

Baby Keem included a wide variety of beats and moods in “The Melodic Blue.” There are rapid, maniacal beat changes in “trademark usa” and “range brothers” as well as sadder, slower tempo songs like “issues,” “lost souls” and “scars,” which unpack Keem’s sense of emotional intimacy. The album maintains a dice-roll attribute, gifting listeners with various paths of interpretation and messages with every single song.

The opening song of the album, “trademark usa,” starts with Baby Keem reflecting on his past and his emotions, mumbling in a seemingly gloomy tone over a slow beat before a chaotic and fiery beat suddenly drops and Baby Keem instantly switches to his signature shrill and passionate rapping voice.

This sudden change in mood in the first song establishes a recurring theme of volatile beat switches scattered liberally throughout the album. The 16 songs all contribute to the melting pot of different moods and abrupt changes, trademarking Keem’s eruptive style and faceting the overall excitement of the album.

In the songs “pink panties” and “vent,” he lets a monotone beat drone for about 10 seconds before slamming listeners with unexpected introductions that some might call strange or even outrageous beat changes. Regardless of its atrocity and spontaneity, it was absolutely hilarious and set a great, random mood for the rest of the songs.

At the start of “pink panties,” he suddenly drops a deep, burly voice with a very odd tone setting a frankly hysterical voice and mood for the song. Similarly, “vent” explodes with Lamar passionately yelling obscenity-laced messages in bursts.

Two of the consensus best songs on the album are “cocoa” featuring Don Toliver, which features a cheery beat and catchy tempo, and “range brothers,” in which Baby Keem and Kendrick Lamar proved themselves to be one of the best synergies currently in rap, especially when they went back and forth effortlessly in the last portion of the song.

One part that many found hilarious was the last minute of the song, in which Lamar repeated the phrase “Top of the mornin’” 14 times and Baby Keem repeated the phrases “Rollie gang” and “Rover gang” three times each with no clear meaning.

Their verse was a different and interesting mix of funny lyrics and unique sounds, adding to the overall unpredictability of the album. Baby Keem places a heavy emphasis on money, women and fame through vastly different sounds and motifs which chart many peculiar paths that converge toward the overarching theme.

Perhaps Baby Keem’s most meaningful and surprising play in his 16-song album is ending it with the conveniently named song “16”. The slow, repenting, nearly ethereal song almost serves as a self-reflection of how fame and money are fleeting and real value is found by focusing on himself. The message and sounds of this single song contradicts but beautifully pairs with the rest of the album and capstones the album’s various interesting colors and ideas.

Possibly the most impressive attribute about this album is that Baby Keem produced or co-produced 14 of the 16 songs on the album as a young upcoming artist. While most famous artists hire producers, the vast majority of the distinguishing beats and great production quality on “The Melodic Blue” can be credited to Baby Keem himself.

Baby Keem’s album has proven that he can live up to his legendary cousin Kendrick Lamar and can revolutionize the rap scene with a starkly different style and voice. This album is a clear depiction of the creative depth Keem is capable of, which is nearly unmatched from any other current rap artist at the moment. “The Melodic Blue” is a powerful paving for what seems to be an illustrious and interesting career for Baby Keem.