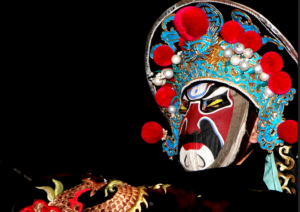 Permalink
Stepping out of the shadow of its misogyny, Bian Lian is a Chinese performing art form as mysterious as it is fascinating

“Game of Thrones” creeps me out.

Among its many questionable plot points, the one thing that’s unquestionably creepy is Arya Stark’s changing faces. Seriously, this girl learned to carve off someone else’s skin, wear their face as a mask, and peel it off within seconds.

Now, what if I told you that changing faces is not just cinematic science fiction, but a reality, and there is a traditional Chinese art form that allows actors to do just that? This art form is called 变脸 (Bian Lian), or face-changing.

Before you get any expectations that I’m a world-class face-changing master, sorry, I don’t know any ancient secrets — because I’ve been unable to find a mentor.

In order to understand why, let’s delve into some history.

Face-changing developed during the 1700s in the Sichuan region of China. Its exact origin remains unclear, but one legend says that face-changing was inspired by a hero similar to Robin Hood, who evaded authorities’ capture by changing his appearances in the blink of an eye.

Since its conception, there has been a tradition for masters to only pass down the secret of face-changing to male descendants, fearing women would marry out of the family and leak its secrets. The patriarchal taboo was broken in 1998, but even so, many masters still refuse to teach girls.

Similar gender exclusions were seen in the rising period of Chinese opera, the Qing Dynasty, a time when imperial decree forbade women from performing in theaters. As a result, troupes cast men to play female roles. These actors, known as nandan, sang with specialized falsetto techniques and moved in what’s considered a feminine manner.

Having men act as women is hardly unique to China. As early as the 500s BC, the Greeks decided it was too “dangerous” to allow women on stage and instead cast men in roles. In Elizabethan Europe, too, female characters such as Shakespeare’s Juliet and Ophelia were played by trained young men. The practice continued until the 1660s, when King Charles II allowed women to act, but even then, actresses were fetishized rather than respected.

It is as Arya Stark said when explaining why she learned to change faces: “The world doesn’t just let girls decide what they’re going to be.”

But unlike Stark, a face-changing master doesn’t actually cut human skin off of corpses. Instead, vibrant masks are painted on fabric, each representing a distinct character, such as a flushed face for the renowned military general Guan Yu.

These masks are donned inside a full set of garments especially designed for the trick and are changed at speeds imperceptible to the human eye, sometimes aided by distractions such as a folding fan or a billowing cape, while the master glides about the stage in fluid movements that resemble martial arts or traditional dance.

A tourist reports that even when he adjusted his camera shutter to two-hundredths of a second, he still could not discover the technique of the face-changing performance he recorded.

I’ve independently studied face-changing and can now do a few rudimentary tricks, but mastery of the art is a closely guarded mystery rumored to be China’s Second-level National Secret. Although this claim has been denied by government agencies, it is true that keeping the secret of face-changing is an obligation of every performer.

The most renowned face-changing master, Denghuai Peng, was once offered a deal by an international merchant to trade his props and the secret of the art for one hundred million in Malaysian ringgits, or approximately $200,000 at the time. Peng refused without hesitation, stating that “it is a matter of Chinese dignity.”

Indeed, Reuters found that as of 2009 there are only 200 people in China who have truly mastered the art of face-changing, its innermost workings a mystery. Knowing this, I have no right to disclose even the surface of how face-changing works.

I will, however, highlight the face-changing tradition that’s always touched me the most: As the performance comes to an end, the master will lift the final mask to reveal their true face. This is the moment the audience erupts in applause — even if the face revealed is that of a woman.

Despite the rooted patriarchy in face-changing, female masters are stepping into the spotlight and now we can read inspiring stories about women mastering the art of face-changing despite all odds.

I hope my introduction is able to hook your fascination with face-change. Search up “Bian Lian” and let yourself be awed by some video recordings, or if you get the chance to visit China, sit down for a live performance that can only be more stunning.

The art of face-changing, as I understand it, allows us to choose faces at our own discretion instead of others’. It is a reclaiming of agency.

“The world doesn’t just let girls decide what they’re going to be,” Arya Stark had once said. Yet, after a pause, she continued, “but I can now, with the faces I can choose.”