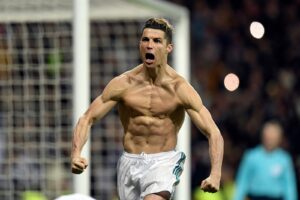 Professional soccer player Cristiano Ronaldo celebrates a goal by taking off his jersey.

After Manchester United’s last-minute triumph against Villareal in the UEFA Champions League on Sept. 29, superstar Cristiano Ronaldo tore off his jersey in celebration to reveal a stunning, muscular body. Most of us lesser mortals could only envy him.

At age 36, Ronaldo is only getting fitter — not an ounce of fat can be seen on his shredded figure, and his body almost looks like those sculptured diagrams in biology class. That got me thinking: How has Ronaldo maintained his stellar physique for so long?

With some simple research, I learned that Ronaldo’s strict training regiment follows a precise combination of training, diet and rest.

In an interview with Goal, Ronaldo said, “A good workout must be combined with a good diet. I eat a high protein diet with lots of whole-grain carbs, fruit and vegetables, and avoid sugary foods.”

His workouts consist of soccer drills, cardiovascular exercises and weightlifting. Hydration is key, too — in a recent press conference, Ronaldo removed sponsored Coca Cola from his table, urging viewers to “drink water.”

In an attempt to adopt this impressive lifestyle, I planned a “high school” version of Ronaldo’s schedule: daily gym sessions after school, frequent jogs around the neighborhood, intense pre-workout stretches and a strict, healthy diet. Although I was somewhat well-versed in the world of fitness, I wanted to take it to the next level.

The first day came and went as planned. I pushed myself through an afternoon of upper and lower body training, drinking only water and consuming meals of almond yogurt, fruit, chicken, vegetables and rice.

Unfortunately, I woke up the next morning unable to move: My legs wouldn’t budge from the previous day’s 5-kilometer run, and my chest and shoulders were numb from lifting dumbbells way out of my comfort zone. My entire body ached, and with an entire day of school and training looming ahead, I’d already hit a dead end.

Moreover, taking on one of Ronaldo’s famous cold showers only slightly soothed the pain, and I stumbled to school like a zombie. The next few days followed a similar pattern of burning soreness, struggling through exercises and eating a minuscule variety of food.

Yet, by the time the final day rolled around, I’d gained a sort of immunity to pain. My body developed a tolerance for post-training soreness, and by day seven of the cold showers, my senses were at an all-time high — the results were clearly there.

As such, I’ve decided to carry on with my routine, albeit with a more toned down one (I’ve confirmed my speculation that I’m no Cristiano Ronaldo), but in this short yet meaningful journey, I’ve learned so much about fitness and commitment.

Ultimately, what it takes to be a “Cristiano Ronaldo” is an unmatched level of determination and dedication to fight the mental battle against doubts or failures. Of course, not everyone is capable of becoming Cristiano Ronaldo himself, but we can all learn a thing or two from his undeniably elite lifestyle.