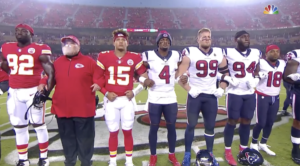 Chiefs and Texans players link arms in solidarity on opening night of the NFL season (Sept. 10)

At an NFL preseason game in 2016, San Francisco 49ers quarterback Colin Kaepernick sparked controversy when he decided not to stand during the pre-game national anthem. Instead, he chose to take a knee — an action later used by athletes nationwide to protest police brutality and structural racism in the country.

“I’m not looking for approval,” he would later say. “I have to stand up for people that are oppressed. Even if they take football and my endorsements from me, I know that I stood up for what is right.”

Athletes have been involved in activism for decades. In the 1960s, pioneers such as legendary boxer Muhammad Ali and NBA player Bill Russell were willing to risk their reputations and careers to speak up about what they believed in.

Although Kaepernick played his last NFL game in 2017, athletes continue to advocate for change. Now, NFL players are protesting differently: Players across the league have kneeled, locked arms or remained in their locker rooms during the national anthem to protest police brutality and racism.

NBA players have conducted similar protests, with commissioner Adam Silver stating in July that he will not enforce the league’s rule requiring players to stand during the anthem in order to allow them to advocate for social justice on the court. Most recently, players have protested the murders of George Floyd and Breonna Taylor as part of the larger Black Lives Matter (BLM) movement.

Despite sports leagues beginning to encourage athletes to advocate for social justice issues, some fans do not feel the same way. These fans often argue that some athletes hold questionable views that impressionable children would not benefit from seeing. For example, NFL wide receiver Desean Jackson received backlash after anti-Semitic posts on his Instagram account in July. Jackson later apologized for his post and said he was educating himself on the matter.

Anyone who frequents sports forums online, or even the internet in general, has seen statements telling athletes to stick to sports — for example, Fox News personality Laura Ingraham infamously told NBA stars LeBron James and Kevin Durant to “shut up and dribble” following their criticism of President Trump in February 2018. Some have even stated they will stop watching their favorite sport due to the stances athletes take on various issues.

Others, however, believe that athletes are simply people with jobs, so they — just like normal citizens — are entitled to voice their opinions on various topics. In fact, because of the significantly larger platform that many athletes have, many argue that athletes should not only be allowed to use their voices, but actively encouraged to do so.

One thing’s for sure: Athletes will continue to use their platforms to address and raise awareness for social justice movements, highlighting just how important these movements can be. No matter who you are — whether you’re a parent or a student, whether you watch sports or not — these athletes will continue to remind you to stay up to date with these social issues that will affect the U.S. for years to come.