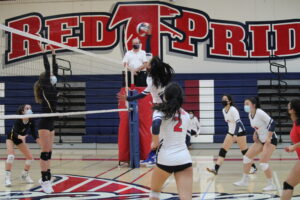 Sophomore Lisa Fung stepped onto the volleyball court for her team’s last game of the season against Wilcox. Fung was playing outside, a position that she was unfamiliar with. After shaking off the initial nervousness of playing her new position, she aggressively approached a set from her teammate and spiked it past the net, winning the point.

With sports seasons rearranged because of the pandemic, many multi-sport athletes were forced to reconsider which sports they wanted to participate in. However, some athletes, like Fung, have opted to take on the physical challenge of playing multiple sports this year.

Fung joined the swim, volleyball and track and field teams. Last year, she did volleyball, basketball and track, but because none of her typical sports were offered in season 1, she decided to try swimming.

“The seasons have been very enjoyable and I've met a lot of new people through these sports,” she said.

Fung decided that participating in sports would be the best way to connect with others during the pandemic.

Despite the truncated seasons, Fung said she hasn’t noticed a significant shift in her schedule. However, because sports weren’t offered in the first half of the year, the return to practices and sporting events prompted her to be more efficient in managing her time.

“Transitioning between sports and different schedules has been a little challenging, but I am completing my school work faster and being more efficient with studying to stay on top of my classes along with sports practices,” Fung said.

Fung has allocated her sports so that they all fall into different seasons, avoiding the need to participate in sports simultaneously. However, some athletes have decided to take on multiple sports during the same season.

Junior Giulio Morini-Bianzino wanted to continue participating in basketball and track and field as he has in previous years, which are winter and spring seasons respectively. However, because of this year’s rearranged seasons, both of these are Season 3 sports, meaning he plays on both teams simultaneously.

Despite the challenges of playing multiple sports at once amid the pandemic, Morini-Bianzino has never regretted his decision, as he loves the sports and also finds that they improve his academic performance. For him, athletics are a way to have fun, as well as a way to stay rooted.

However, Morini-Bianzino has found handling the time commitment of the two varsity sports to be a struggle. Though the sports’ practice times do not overlap, Morini-Bianzino said they are very physically demanding.

“Doing both sports at the same time is definitely a challenge because I am constantly tired and sore,” he said. “Having no downtime is also a little rough, though there’s not much else going on currently with COVID.”

Even with these obstacles, Morini-Bianzino has enjoyed continuing his athletic journey.

“We are just grateful for being able to have a season, as it was looking doubtful a few months ago,” he said.