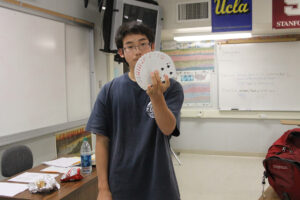 Magic club is no longer an official school club.

For the past two years the Associated Student Body (ASB) has been making an effort to weed through the massive nu of clubs on campus and decide whether or not they are qualified to be school sponsored clubs.

For the past two years the Associated Student Body (ASB) has been making an effort to weed through the massive nu of clubs on campus and decide whether or not they are qualified to be school sponsored clubs.

“This isn’t the first year that we have done this,” assistant principal Karen Hyde said. “We tried last year as well but unfortunately, it was not as effective.”

According to Hyde, it has been a myth among students that starting a club will make their college application stand out. Two years ago not one of the students who was accepted into an Ivy League school or Stanford had started a club, Hyde said.

In fact, college admission officers have said 70 clubs in a school with a population of 1,300 students is unreasonable.

“College admissions officers have assured us that they don’t care if kids start 20 clubs,” said Hyde.

“That’s not the criteria for getting into college.”

To get this point across, ASB decided that they needed to look at the clubs two years ago to see whether they had members and were actually doing what they had claimed upon they would.

“We need to give status to clubs that are legitimate,” Hyde said, “not to just kids that want to do it for college.”

This year the ASB has created a master list of the clubs so that they can be more organized and more easily investigate the clubs that are on their one month trial period or are not as active.

In order to fairly judge this ASB has set certain criteria that the clubs must fulfill.

“The club leaders must present at an ASB meeting and prove that they are not just a duplicate of another club already on campus,” Hyde said. “Along with presenting, the club must also have 20 members and a faculty adviser.”

ASB members have been dropping by the different club meetings to see whether or not the club has members and is fulfilling its mission.

“After the club has been approved by the ASB the club has a one-month trial period,” said board representative Anshu Siripurapu. “This way we can see whether or not the club is actually doing what they say they are doing.”

So far ASB has only needed to cut one club, the magic club, because it was not able to meet the requirements set by the ASB. Though it is not longer considered an official club, it has not prevented the members from still meeting.

“I started the club so that more people would be aware of what magic is and how much fun it can be,” said club president junior Fredrick Lee. “Even though it is not considered a club anymore we are still meeting and practicing magic.”

Hyde had some advice for students who feel the need to create a club to be accepted in to a prestigious university:

“Kids need to understand that starting a club should be from the heart and not because you want it on your resume.”