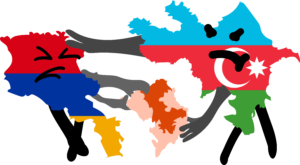 Until a month ago, many people didn’t know about the existence of the Nagorno-Karabakh territory, a disputed region between Azerbaijan and Armenia just above the northern limits of the Middle East. Its conflict, overshadowed by Turkish, Russian, and Middle Eastern politics in the surrounding region, rarely got media coverage.

That changed after the dispute evolved into an almost full-blown war when Azerbaijani forces began an offensive into the Aras Valley, a region just south of Nagorno-Karabakh, in early September. In the two months following the beginning of the conflict, there have been futile attempts at ceasefires (Trump’s lasted just minutes before hostilities were resumed), civilians targeted from both sides, and subtle hints of support from major powers amid calls for an end to the conflict.

As Azerbaijani forces appear to emerge victorious in the conflict, with a final ceasefire creating peace that could be undermined by Armenian public discontent, supporters of Armenian authority in Nagorno-Karabakh (alternatively referred to as “Artsakh” by Armenians) continue to mainly and consistently maintain a notion that an overwhelmingly Armenian population as justification for trying to take control of the area. Those supporting that notion have disregarded the context and true nature of its population, and the reasons behind its homogenous nature.

While Nagorno-Karabakh has been an autonomous region within Azerbaijan, its population has also been mostly Armenian. Still, there is a significant Azerbaijani population that has been largely disregarded. When the Armenian-led authorities in the region held a referendum in 1991 on its legitimacy, its near-unanimous vote in favor of recognizing the sovereignty of the Republic of Artsakh, the Armenian-led government of the region, didn’t account for the roughly 20 to 25 percent Azeris, who boycotted the referendum.

What followed the referendum was an all-out war, leading to the Armenian military controlling Nagorno-Karabakh and a large portion of the surrounding territory, atrocities committed by extremists on both sides, and forced deportation of at least 40,000 Azeris at the hands of Armenian nationalists.

In the decade following the conflict, 700,000 Armenians would flee Nagorno-Karabakh and other portions of the one-fifth Armenian annexed Azerbaijani territory, contributing to nearly 10 percent of Azerbaijan’s population at the time. And while there were undeniably Armenian refugees who fled Azerbaijan in the conflict, the majority of Azerbaijani refugees faced a problem of a different nature, becoming refugees in their own country.

Given the increasingly deviant nature of the conflict with ceasefires called on and off in just minutes, Azeris are gradually returning to the regions they were once pushed out of as Azerbaijani troops move into the territory lost in the previous war.

But the fragile nature of the peace that may be brokered once again raises questions about the return of Azeris to both Nagorno-Karabakh and surrounding regions.

The issue shouldn’t regard which side has committed more atrocities or has had more of their people killed in the past decade of conflict. Rather, the issue lies in the current demographics of areas under Armenian occupation, their misleading nature, and the refugees who’ve intermittently awaited their return to the occupied regions.

With the most recent ceasefire, which gave back most occupied territory surrounding Nagorno-Karabakh previously under Armenian occupation, some say sufficient justice has been done.

But as tension continues and divisions still run rampant despite a fragile peace, global powers may have to come to terms with the region’s significance and the question of easing tensions between the ethnic groups as some return to their villages after decades in exile.