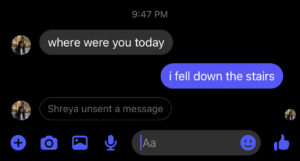 It may sound suspicious, but every once in a while I send a message with my iPhone that I want to delete.

It’s usually a joke I’ve sent to my friend that I want to take back. Or a misspelled word I want to correct. Or an accidental message I’d prefer to unsend instead of awkwardly explaining that I didn’t mean to send it.

The unfortunate reality, though, is that I can’t delete my texts on iMessage.

Every other messaging app I use — Instagram, Snapchat and Facebook Messenger — lets users delete messages. iMessage has caught up with other features including in-line texting replies, message reactions and customizable group chats, but apparently Apple is too stubborn to add this feature to the iPhone’s default texting app.

I understand that it may be impossible to delete SMS texts between users of different phones (when an iPhone texts an Android phone), but many people have iPhones; texts between iPhones should be deletable.

Without the ability to delete messages, I have to use other apps for group chats with some of my friends — and it’s frankly annoying. This is one of the reasons I still haven’t deleted Meta (previously Facebook) apps.

So Apple, while you likely have many other things to work on, please find the time to make deleting texts a feature.