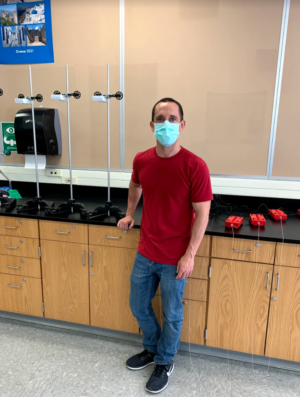 “We got to use fancy equipment that we didn’t use last year like photogates and projectile launchers,” Li said. “It’s like the AP Physics 1 motion lab except for more advanced equipment, so it was cool to build off of previous knowledge and do more advanced concepts.”

AP Physics C was added as a course this year and is taught by Welander, the current AP Physics 1 and 2 teacher. The class is split into a semester-based schedule much like the other AP physics course: Physics C students learn about mechanics in the first semester, and electricity and magnetism in the second.

Because this is the first time the curriculum has been taught at the school and requires knowledge in a specific area of physics, Welander had to put in extra time and effort over the summer to prepare the material and ensure the class’s success.

“Back in February when I found out that enough people signed up for it, I started watching College Board review videos that they’ve created,” Welander said. “Later in the spring, I started searching out labs that we could do in the class that were distinct from Physics 1 and 2.”

After figuring out a basic outline for the course, Welander compiled a list of labs that they would perform over the course of the year, started purchasing lab equipment and textbooks and began writing the lecture notes.

Instead of going to a training seminar that was canceled due to the lack of participants, Welander did the first few labs by himself to ensure that the instructions were at the level of detail his students need.

Although preparing the new curriculum was a lot of work, Welander felt that it was rewarding and would set himself up for success in subsequent years.

“It definitely is time consuming and a bit stressful when there’s not a lot of time left for yourself, but at least you know that the time you put into it will pay off,” he said.

The extra effort Welander dedicates to the class has not gone unnoticed by his students. Li especially likes Welander’s approach to teaching in both physics courses, adding that it is “clear and concise.” Welander typically lectures in class with slideshows and assigns free-response questions, lab handouts and textbook problems during class for extra practice.

As the school year kicks in and Physics C students begin learning about topics from kinematics to gravitation in a calculus-based context, Li is excited to learn more about the real-world applications of physics in an in-person environment.

“I’m looking forward to the class because it will be more fun than last year; if we actually stay in person, then we can do actual labs and hands-on demonstrations,” Li said. “This lab made me realize that physics is very involved in the world today and that the calculations we do are surprisingly accurate.”