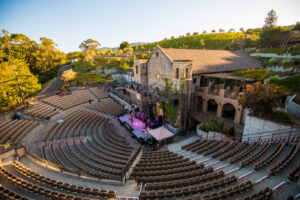 After strong public opposition, Saratoga city council moved to end the annexation process in a 3-2 vote. The winery will remain under Santa Clara County control.

On Jan. 23, Nextdoor, an online neighborhood communication platform used by many Saratogans, exploded into discussion as word spread about a proposed 300-room hotel and resort in the hills above the city.

The city of Saratoga first proposed annexing the Mountain Winery, which doubles as an event venue and is located on the long, windy Pierce Road, in order to control its development. The winery’s counteroffer, however, included permits for a full-set resort including “indoor and outdoor recreation, dining, entertainment, meetings and special events, retreats, lodging, wineries, spas, agriculture and other similar commercial activities.”

Following the subsequent public hearing regarding the annexation, the council voted 3-2 to terminate the annexation process, with mayor Howard Miller and councilmembers Rishi Kumar and Yan Zhao voting in favor of termination and vice-mayor Mary-Lynne Bernald and councilmember Manny Cappello voting to continue the process of annexation.

The winery will remain under the control of Santa Clara County on a county-issued conditional use permit, ending any chance that Saratoga will have the final say in its development or receive its tax revenue.

The council’s vote came in a meeting held on Zoom on May 20 that lasted nearly eight hours. At peak engagement, there were 140 users tuned in to the webinar.

“I applaud [Mayor Miller’s] decision of being able to read the emotion and the anger in the room, and that came in in those more than 300 comments,” said Angela Ling, an opponent of the annexation. “That was a very narrow win.

Prior to the vote on the annexation, around four-fifths of the public participants expressed that they preferred to postpone the discussion in a separate public hearing, but the council members voted 4-1 in favor of proceeding with the discussion.

The subsequent discourse on the annexation, including the public hearing and the councilmembers’ discussion, extended until nearly 3 a.m.

Among the public commenters was David House, one of the four owners of the Mountain Winery Property. House argued in favor of annexation, stating that annexation of the property would give Saratoga more leverage in the decision-making process of the land use.

Saratoga resident David Rossi, who also supported the annexation, stated that the annexation issue was much bigger than the 300-room hotel and that annexation would ultimately give the city more power in controlling the land use of the Mountain Winery.

Some citizens, regardless of whether or not hotel construction was the table of discussion, opposed annexation because they felt it would set a precedent for further commercial development in Saratoga.

Glenda Aune, a 35-year resident of Pierce Road, strongly opposed the annexation of the Mountain Winery. Aune said that even if the prospect of building the hotel was set aside, she would still be opposed to annexation as it would “open the door for more urban sprawl in [Saratoga’s] beautiful hillsides.”

In a vote following the vote on annexation, the council decided to refund about half of the $247,000 that the Mountain Winery had spent on consultants for the annexation project, including the fees for the Environmental Impact Report (EIR); Kumar was the only dissenting vote.

While Miller originally supported the annexation project, he explained that he did not expect the EIR to approve a 300-room project. He said he thought, in retrospect, that the council did not address the process of annexation in a way that engaged the public.

“It should have been a far more rich and in-depth process with the citizenry to say, ‘what we should even talk about?’ in terms of the annexation,” Miller said in the meeting. Instead, he said the council misinterpreted the public’s input, sending the council “down a path of speculation and misinformation.”

In the meeting, Bernald said that she felt that annexation would help protect Saratoga’s hillside environment and voted in favor of the annexation despite resistance from the public during the hearing.

“I want to engage the residents in a dialogue, build a community,” she said. “I want the residents to understand that we are the type of community that appreciates their input. Somehow, in the process that we’ve done, that fell apart.”

Ling, a resident of Pierce Road, said that she felt the council had “failed to engage with the public” on the matter and lost some of the trust of the public, as Cappello and Bernald turned down her requests to meet and discuss the matter. Cappello cited the Brown Act, which guarantees that all meetings of a local legislative body shall be open and public.

As a result, Ling and other residents plan to propose a “post-mortem analysis” for residents to hear Bernald and Cappello’s reasoning and where they felt the process went wrong.

Although the discussion of the annexation began in Sept. 2018, the news of the proposed hotel first spread when Carol Miller, who lives within 1,000 feet of Mountain Winery, received a letter of notice of public hearing in late January of this year from the city regarding a permit for new uses of the Mountain Winery land.

“I was the only one in the Saratoga Heights HOA who received a letter because I texted my next-door neighbors, but no one else got a letter,” Miller said. She speculated that her home must have been barely within the radius.

After Miller received the letter, she contacted one of her neighbors, who contacted the secretary and a board member of the Saratoga Hills Homeowners Association (HOA).

Afterwards, the HOA began spreading word about the proposed adoption of the Mountain Winery, and Miller teamed up with the president of the HOA, Ling, to alert citizens of the expansion and annexation plans.

Although the letter of notice to Miller and the public was sent out late January of this year, the city, according to its posted agenda, has been meeting with the Mountain Winery ever since 2017 to discuss an annexation deal. The meeting minutes, however, were never recorded.

On Feb. 12, the city's planning commission voted 7-0 against the annexation of the Mountain Winery, but the vote was merely advisory to the city council.

Prior to the council’s decision, Ling said she believed that the impact of the Mountain Winery decision would be monumental for residents.

“This decision will be very, very impactful for decades, if not generations,” she said. “It will determine what our hill looks like in 20 years and in 40 years.”