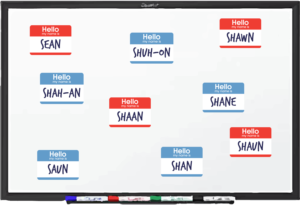 Hello. My name is Shaan.

It’s pronounced the same way as its alternate spellings — Shawn, Sean and Shaun. It’s a fairly simple name in my opinion, but for some reason, it’s prone to a lot of confusion and mispronunciation.

You’ve likely met someone like me; there are quite a few Shawns and Seans in the Bay Area, though I haven’t met many Shauns.

You could say I’m exotic with two A’s to my name — my parents wanted an Indian name but also an easy American name, so they gave me the Indian spelling of a common American name.

The whole goal of this was to prevent situations where people thought my name was too hard to pronounce (my parents did not want to make my life harder by giving me a traditionally religious, seven-syllable name). Anyhow, this supposedly American name keeps getting messed up.

The common mistake: calling me Shane.

I honestly don’t know what leads to this misunderstanding. Two As (aa) does not lead to a stressed a (ā). What part of Shaan remotely looks like Shane? If anything, the next common mispronunciations — Shuh-on and Shan — make much more sense.

Whether it be in the Middle East or Asia, the use of “aa” to create an o-like sound is common. The average American should know enough about these cultures in order to ascertain the simple pronunciation trick — especially if they’re of Asian or Middle Eastern descent.

When I was in 8th grade, my teacher was Indian. I remember sitting next to one of my best friends — also Indian — and waiting with him to hear my teacher pronounce my name with ease after my previous teachers had butchered it. To my grave disappointment, my Indian teacher messed up my Indian name worse than all my previous teachers. Somehow, Shaan turned into Shah-an on the class roster.

There’s also the occasional person who seemingly doesn’t know how to pronounce any variation of the name Shaan.

While ordering a boba drink near Main Street Cupertino, I was asked my name. I pronounced my name as asked and expected to see one of the three expected spellings written on the cup.

I then proceeded to spend more than a minute clarifying my name and how to say it.

Pronunciation issues aside, I’m OK with people writing different spellings of my name when I say it. All those spellings — Shawn, Sean and Shaun — are more common than mine, so it makes perfect sense that they would be used if I had not directly clarified the spelling of my name.

What’s inexcusable, however, is seeing “Saun” on your fast food receipt. In what world does that spelling have the same pronunciation as Shawn?

While getting pizza after Homecoming at MOD, they asked for my name so they could alert me when my order was ready, just like every other fast food joint. They wrote Saun when I gave them my name. It didn’t affect me emotionally in any real way, but it led to an awkward laugh from me and my friends.

I get it. It can be hard to pronounce cultural names. But my name is literally a different spelling of a mainstream name, using a common vowel sound that most Americans are likely aware of.

There’s really no excuse for getting my name wrong — do me a favor, and just get it right.