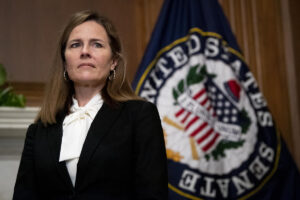 Shortly after the death of Justice Ruth Bader Ginsburg on September 18, attention was focused on the next justice nominated to the Supreme Court and President Trump’s third pick in four years. Tensions flared as the president got a chance to shape the court for decades into a 6-3 conservative majority, potentially endangering many rights most Americans agree with such as gay marriage, abortion rights and the protections embedded in the Affordable Care Act.

One by one, Republicans in the Senate lined up behind Senate Majority Leader Mitch McConnell supporting whichever judge Trump nominated, which was eventually revealed to be Amy Coney Barrett, a judge on the 7th Circuit Court of Appeals, which has jurisdiction over districts in Illinois, Wisconsin and Indiana.

Due to mounting concerns of the Republican Party acting in bad faith only weeks away from an election, disrespect of precedent and bias, Judge Amy Coney Barrett is unfit to serve on the highest court of the land.

To begin, the mere fact that Republicans chose to support a justice nomination proves the blatant hypocrisy of a party that will bend over backward for President Trump but systematically blocked President Obama in every way, especially in regards to the Supreme Court judicial appointments in an election year.

When the late Supreme Court Justice Antonin Scalia died in February 2016, the Republican-controlled Senate was resoundingly against any nomination of a Supreme Court judge, without even knowing who President Obama nominated.

To appease Senate Republicans, President Obama opted for a highly qualified and centrist judge named Merrick Garland. However, McConnell rejected the judge arguing that since 2016 was an election year, the Senate should wait for Americans to vote “on whom they trust to nominate the person for a lifetime appointment to the Supreme Court.”

If this belief is still true in 2020, the Senate should not confirm any Supreme Court judge as this would not only go against what they have said in the past but also go against the will of the people. In a national poll conducted by Reuters, after the death of Judge Ruth Bader Ginsburg, 62 percent of Americans agreed that the vacancy should be filled by the winner of this November’s election.

Concerns over Republican hypocrisy promise to exacerbate political tensions. Each time President Trump nominated a conservative judge to the court, the political firestorm surrounding him seems to get even stronger. In the case of Brett Kavanaugh, many Democrats felt that a Republican-majority Senate didn’t thoroughly investigate sexual assault allegations, leading them to believe that the Senate confirmed him solely because President Trump nominated him.

With a heated discussion already around Judge Barrett’s nomination, pursuing a rushed confirmation on party lines so close to an election will only polarize America further.

Regardless of Republican hypocrisy and polarization, President Trump’s current nominee is also unfit to join the highest court of the land because outside factors could render her decision biased.

Judge Barrett does have a distinguished career in law, graduating top of her class at Notre Dame and returning to teach after clerking for Justice Scalia. However, she believes in a judicial philosophy called strict constructionism, which interprets the Constitution’s words literally, something usually supported by conservatives who dislike expanding the scope of existing laws.

While this frame of thinking may appeal to President Trump, it is clear that a 6-3 conservative court will not only stall progress on key issues like gun control and abortion but also roll back key changes, something Barrett is willing to do according to her past.

In previous writings, Barrett listed many cases that she considered super-precedents or precedents that could not be changed by the court. Missing in that list was the landmark case Roe v. Wade, meaning that Barrett believes it would be possible to change the precedent set by the case in the future.

She is also part of a conservative Christian covenant, People of Praise, which has been reported to subjugate women and reject same-sex marriage. Barrett could very well be under the control of the group and be unable to respect precedent, especially in contentious cases like Roe v. Wade and Bostock v. Clayton County, cases on abortion and LGBTQ rights respectively.

Instead of choosing a possibly biased figure like Barrett, Democrats and Republicans should come up with a shortlist of candidates that they both support. This way, any judge who would seem partisan could be rejected by the opposing party, leaving only a group of judges who would fittingly act as the deciding swing-vote in the nine-judge court.

This would solve two problems. Whether or not an appointee should be approved before or after the election wouldn’t matter, as both parties would agree to the nomination. Also, this show of bipartisanship could warm cross-party relations in other issues.

Amy Coney Barret is the wrong person to be appointed to a Supreme Court in a time where the political divide only grows wider every day. If Republicans decide to not confirm a judge to the Supreme Court, that would relieve tensions between Republicans and Democrats. But at the very least, Republicans need to find someone more moderate and willing to follow precedent than Amy Coney Barrett.