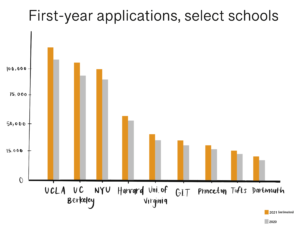 Permalink
Whether it be applying to a wide variety of schools or focusing on a select few, students are doing all they can to be accepted.

When his clock struck 1 a.m., senior Weilin Sun’s head hit his desk with a thud. He let it rest for a second before dragging his eyes back up to his computer screen where a jumble of incomplete sentences glared back at him. He had four more college applications to finish, and was on a deadline set for Nov 1st.

While the typical senior here plans on applying to anywhere from 10-20 colleges based on a recent Facebook poll, Sun is applying to 33, most of which are computer science and engineering-focused schools. After seeing many students  waitlisted and rejected during the pandemic, Sun cast a wide net to increase his chances of acceptance.

“Last year, there were a lot of people who didn’t get into schools I expected them to get into, and even some who got into better schools than ones they were rejected from,” Sun said. “After what happened, I decided that I want to be safe with my applications.”

He added: “There are [other students] who are crazily talented in every school. My strategy is to apply to a lot of schools so I don’t have as much overlap with them.”

Of course, this strategy has long been around. However, it has become more prevalent and necessary as competition increases. In 1960, only 45.1 % of national high school graduates planned on enrolling in a college after graduation. Now, that number is nearing 70%.

With so much competition, many students believe their resumes do not reach the caliber needed to be admitted to their college of choice.

This frenzy of competition can also be seen in seniors’ careful selection of early decision (ED) and early action (EA) schools.

“I’ll try to avoid ED-ing to the same school as someone from our school that has kind of the same profile as me,” Sun said. “I feel like colleges won’t like seeing a bunch of STEM majors from the same high school and won’t admit as many of them.”

This sort of action is indicative of the increasingly tense college application process. While this season has always caused tension for seniors, the situation has been becoming more difficult as admissions become more competitive.

According to the Wall Street Journal, the nation’s most selective four-year colleges have seen a record breaking 17% increase in applications this year. Not surprisingly, the average acceptance rates for these schools have fallen to roughly half of what they were just a few years ago. For example, UCLA experienced a drop in acceptance rates from 18% in 2016, down to only 11% for the 2021 year.

While some students have chosen to apply to a wide range of schools, others have limited their list to a few. Senior Kendal Jarvis is one of these students: He is  applying to just three schools: the Naval Academy, UCLA and CSU Long Beach.  His biggest dream is to gain admission to the Naval Academy.

He is also a talented water polo player, and hopes to continue the sport next year at one of the schools. . He added that if he is accepted into the Naval Academy, he hopes one day he can have the prestige of being a Navy SEAL. However, Jarvis mentioned that his family has expressed concern over his military goals.

“Becoming a Navy SEAL definitely isn’t an easy task, and it requires a special and capable type of person, but it opens many opportunities and educational possibilities”.

While competition has increased over the past year for academically focused students, Jarvis said he believes that his prospects of becoming a collegiate athlete are much better this year compared to last year when he observed many students with 4.0 GPAs get rejected from state schools.

“I’m not sure what the competition will be like this year, although I do hope it’ll be lower,” Jarvis said. “I’m looking forward to seeing what colleges I get into.”