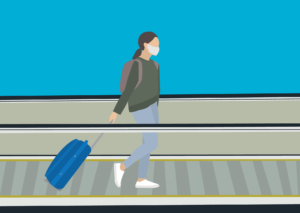 While the country faces yet another surge in COVID-19 cases, some college freshmen are preparing to move on campus for the second semester. For many, the choice to attend college in person was an easy one.

“Doing college from home never seemed like an option for me due to the fact that the expensive tuition would not translate to the education I would receive online,” said Class of 2020 alum Alvaro Fernandez da Ponte, who currently attends Duke University.

Fernandez da Ponte spent this past semester on campus in a double dorm room by himself in Durham, N.C., and will move back next semester as well.

Duke University's handling of COVID-19 response has been highly effective, particularly because of its testing and contact tracing measures.  According to Fernandez da Ponte, students at Duke are tested roughly twice a week and are “incredibly responsible when it comes to following social distancing and mask wearing regulations.”

Two out of the four of Fernandez da Ponte’s fall semester classes were held in person. In these classes, students were required to wear a mask for the entire time and were seated in every other row with three chairs between each person. “This made the in class learning experience a lot safer, but an auditorium that had 500 chairs would end up only being able to hold 80 students or so,” Fernandez da Ponte said.

Class of 2020 alum Joshua Yoon has spent this past semester taking online classes at Carnegie Mellon University (CMU) at home. CMU gave freshmen the choice of moving on campus either first or second semester, and Yoon plans to be at school next semester.

CMU, located in Pittsburgh, has had just over 50 COVID-19 cases on campus since last March and is currently using none of its isolation and quarantine housing, according to data from the school. In addition, CMU requires its students to quarantine for two weeks upon arrival on campus and administers weekly tests for COVID-19 to random samples of asymptomatic students. All dorm rooms are assigned as single-occupancy, with a maximum of five students to a bathroom.

Despite these measures, Yoon noted that simply living outside of his home will pose additional risks.

“I'll have to generally leave my dorm more often for things like groceries, and just being outside in public places will put me more at risk regardless of where I am,” he said.

Still, Yoon said he is most concerned about how well the other students on campus will follow health and safety guidelines. Because the college community is much more diverse than Saratoga, Yoon said he fears many students may come from areas of the U.S. that either don’t support mask-wearing or don’t take it seriously.

“I don't want my own safety and the safety of others to be jeopardized by someone who isn't taking health guidelines as seriously as they should,” Yoon said.

After spending the fall semester as a gap semester and  taking community college classes online, Wang will live on campus next semester.

“From hearing the experiences of people who I’ve talked to on campus, it seems relatively safe as long as you are making responsible decisions,” she said.

BU tests all students for COVID-19 upon their arrival to campus and continues to test them twice a week, regardless of whether they experience symptoms of COVID-19. According to its testing data, the school has seen over 430 positive COVID-19 tests since late July, when it first opened its COVID-19 testing program.

“I’m most concerned about the amount of people living in dorms as well as how well and how regularly the dorms will be cleaned,” Wang said. “Dorms can get crowded, and if one person isn’t responsible, it affects everyone.”

In terms of preparing to move on campus, Wang said she has had to be more careful in her travel arrangements and cut back on what she plans to bring with her. To prevent crowding and close contact with others, BU has mandated that only one other person can help a student move into their dorm.

“Figuring out what to pack has been more difficult because I can’t bring a lot of things I would’ve brought, and it won’t be easy for me to go out and get what I need either,” Wang said.

Both Wang and Yoon said they look forward to experiencing a more conventional college life and meeting new people. From his experience living on campus, Fernandez da Ponte echoes this sentiment.

“I'm overjoyed to have gone [to campus] as I was able to experience life as a fully independent adult along with receiving a world class education,” Fernandez da Ponte said. “There were some ups and downs and a couple all-nighters along the way, but I wouldn't change my first semester at Duke for anything.”