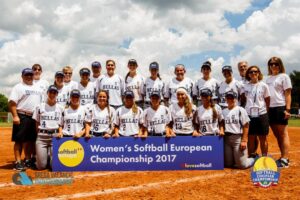 When news came that softball would be becoming an Olympic event for the 2020 Olympics in Japan, Greg Spirakis joked to his daughter, 2016 alumna Eleni Spirakis, that should she reach out to the Greek coach. Thanks to budget cuts for softball in Greece, the coach was recruiting American D1 collegiate athletes of Greek heritage.

Spirakis, who plays D1 as an infielder and pitcher on the Santa Clara University softball team, took her father’s idea seriously and sent an email to the coach.

To her surprise, six months later, Spirakis received a reply and began the arduous task of becoming a Greek citizen. After attaining citizenship status, she was able to play in the 2017 Women’s Softball European Championships in Bollate, Italy, held from the end of June to the beginning of July.

“I was absolutely thrilled to hear I was selected and relieved because the citizenship process was super long and complicated, so it was great to know it wasn’t all for nothing,” Spirakis said.

Spirakis started her journey with a one-week training camp in Italy, where she met her coaches and teammates. With no familiar faces, Spirakis was initially startled by expectations to become a “highly competitive international” team in one week. She eventually adjusted to the team’s fast pace, attending two practices a day.

Along with practices, Spirakis and her teammates also held training camps for kids living in the communities who were lending the fields and equipment to team.

“This was one of the best parts of the trip because it showed me that sports are universal,” Spirakis said. “None of us knew Italian, and the kids didn’t know Greek or English, but we were still able to coach them and help them improve.”

Spirakis and her teammates faced off against the Netherlands international team in the first of 11 games the team would eventually play.

“In my first college game, I was super nervous, but all I felt in my first international game was excitement,” Spirakis said. “It was such a unique experience that I wasn’t going to let myself stress about how well I was going to play.”

The team finished sixth out of 23 teams at the European Championships, qualifying them for the European Cup in 2018. Although Spirakis and her teammates had hoped to secure a spot among the top three, which would have enabled them to compete in the 2018 World Championship, they have not lost sight of the bigger picture: to play in the 2020 Olympics.

Spirakis will continue to train and play with her collegiate team, but will also attend occasional training camps around the U.S. and in Greece for the Greek national team.

“This year was more of a trial run,” Spirakis said. “We will be playing other international competitions to prepare. The Olympics would be a dream come true for me.”