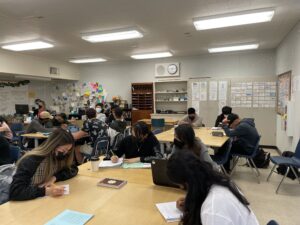 Photo by Sanjoli Gupta
Students in Laws's English class work on exploring complex topics such as identity and rhetorical appeals in daily journals.

As students walked into teacher Andrew Dimock’s first-period English 10 class one day in February, the atmosphere felt tense — although the  “All Quiet on the Western Front” unit focused on the detrimental effects of war was drawing to a close, news of Russian president Vladimir Putin’s troops entering Ukraine was everywhere.

By incorporating the Russia-Ukraine conflict into classroom discussions regarding war and diplomatic relationships, students gain insight on how history reflects current-day issues and the importance of understanding what a war truly means.

“All Quiet on the Western Front” by  Erich Maria Remarque is a novel centered on soldiers’ experiences during World War I. During the unit, sophomores drew comparisons of topics such as brotherhood, the horrors of war and disillusionment through analyzing poems and the novel.

Dimock, who is a long-term substitute this semester,  has experience teaching war-related literature to many high school and college students. He feels strongly that  teaching students about war is necessary. Despite the circumstances in Ukraine, he felt that the sophomores were handling “All Quiet on the Western Front” with sophistication and respect.

“The students’ ability to understand the stakes of [the war in Ukraine] and relate to these young soldiers — who were being sent off to war with a whole array of nationalistic ideals stuffed into their heads — was very impressive,” Dimock said.

Most students who read the book in his class expressed anti-war and anti-militarist views, which has not always been the case when he taught the book in the past. In Dimock’s experience, high school students often get bored with class novels, so the steady participation here has made classroom discussions more engaging.

“Prior to the crisis in Ukraine, the students had strong opinions about the war, but they didn’t feel like it was directly related to them,” Dimock said. “Once the war broke out, it suddenly became more personal. Some students expressed their fear [about the situation].”

This year, many 11th graders  have learned about the realities of war and its long-term consequences through novels like “The Things They Carried.” English 11 Honors students have been reading the 1991 novel, which focuses on soldiers and their experience in Vietnam as well as the war’s effects on the people in Vietnam.

Teacher Megan Laws also spoke about the consequences of war in her sophomore English classes.

In previous schools where has worked such as Scotts Valley High, she’s had several students who have gone on to enlist in the military. She thinks it’s imperative for students to understand the potential costs that path entails.

“Students can have empathy for those individuals who are fighting in Ukraine and know what they’re going through without having to actually have experienced it themselves,” she said.

Laws said the Russia-Ukraine conflict has brought a sharp focus to the atrocities of war.

“We’re lucky we’re not experiencing [war] in our own country,” Laws said. “We are seeing in Ukraine with Russia’s invasion that there is a potential for a bigger war to occur. And there’s no talk in a textbook about that.”

History and MAP teacher Mike Davey often brings current events into his classes, and Russia-Ukraine conflict has been no exception in his sophomore and junior MAP history classes. Students learned about historic characteristics of Russia and its politics, like straddling the East and West, having strong men rule and seizing land when countries around them are weak — all of which fit right into the current crisis. With a strong leader such as Putin ruling, they can take the East and seize a significant amount of territory, he said.

“[Students ask] questions like, ‘Mr. Davey, how could the West do nothing when they took over Czechoslovakia?’ And my answer to that is, ‘What are you [the students] doing right now?’” Davey said.

To bolster understanding of the situation in Ukraine, Davey runs 20-minute current-event discussions every morning in his MAP 10 classes. The class has also watched videos such as Zelensky’s speech to congress and discussed its implications.

“I feel powerless and helpless. I’ve donated as much as I possibly can to UNICEF and the International Rescue Committee. I watch the news, sit there and cry,” he said. “It’s disheartening to see what human beings can do to other human beings.”

Davey feels the conflict is tragic, and he has discussed with his students how the events leading up to this situation have impacted the severity of Putin’s actions. He said the west was cognizant of the threats that were posed during World War II and the Cold War.

“I think the fact that we didn’t do a lot in 2014 when Obama was president, other than minor sanctions when Russia took over Crimea, and Trump enabling Putin for four years taught Putin the same lesson,” Davey said, arguing that both Obama and Trump’s actions showed Putin that he wouldn’t face much backlash.

Davey said the current sanctions are the biggest sanctions since ones the U.S. placed on Iran.

Sophomore Eric Shi, who is in English teacher Marcos Cortez’s English 10 class, sees the connections between the Russia-Ukraine conflict and “All Quiet on the Western Front.”

Through reading the book, Shi recognized that innocent citizens end up suffering because of powerful leaders’ actions. Shi said both Russian and Ukrainian citizens don’t want war, as he’s seen videos of both sides wanting the carnage to end.

As for misinformation and propaganda, students in Laws and Cortez’s English class had to make posters which created “good” propaganda while also exploring the negative effects of it. This activity displayed how propaganda can influence people to support a war that they don’t understand.

Shi said there is still a lot of fake news regarding the situation and the Russian military has targeted television towers in Ukraine and other media in an effort to deter coverage.

“‘All Quiet on the Western Front’ deals with a lot of the horrors of war and the impact war has on people,” Shi said. “War affects real people and I feel like [people who debate about the war] forgot about that.”