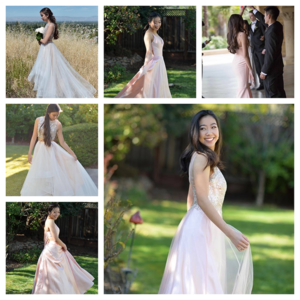 With junior prom canceled, students have to find ways to use the dresses they purchased.

As junior Anya Jobalia opened the email from assistant principal Matthew Torrens and took in the bold black words “Junior Prom is Canceled,” she immediately reached for her phone to share the disappointment with her friends. The excitement and anticipation that came with the preparation for the dance, from pre-prom to after parties, melted away as she realized her prom wasn’t going to happen. The email explained the cancellation was due to the growing coronavirus risks with large groups of people.

When Jobalia finished reading the email, she realized she was upset about missing out on such an important high school milestone. More than just the dance itself, Jobalia was frustrated that she wouldn’t have the opportunity to show off her extravagant dress and make memories with her friends like she had been looking forward to.

“I think that it was an important part of the high school experience,” Jobalia said. “It was supposed to happen. I was really excited about getting ready and taking pictures with all my friends.”

Before the tickets went on sale and the theme was released, many juniors began planning for the event. The excitement was clear as throughout February and early March, many students excitedly posted their dresses on the “Jprom 2020 dresses” Facebook page made by the junior class officers.

Prom dresses come in a variety of styles such as ball gowns, A-line and high-low. They can also come in many patterns like lace, sparkles or floral. For a majority of dresses, the prices range from about $100 to $200, but some ran around $700. To find the right dress in terms of style, pattern and price, girls began their search well in advance.

Jobalia began looking for a prom dress in February and was pleased to quickly find one that matched her criteria by early March.

“I wanted my dress to have sparkles or glitter because I did not want it to be plain, and I wanted it to have a slit on the leg to make me appear taller,” Jobalia said. “I was excited when I found a dress that fit me well, fit my criteria and was in my budget.”

Junior Charlotte Shewchuck began looking for her dress in early February. It only took her a few days to finally find the dress she wanted.

“I wasn’t looking for any particular style or color,” Shewchuck said. “I was more looking for something that stood out from the floofy tulle dresses or the satin bodycon ones that are everywhere.”

She chose a purple V-neck dress that came down to her calves and bought it online on ASOS.com for $95 with coupons.

“I was excited to see the dress when it came,” Shewchuck said. “My sister was skeptical of how it would look and fit because not meeting expectations is common when shopping online, but when I put it on I felt really good.”

However, now that the dance has been canceled, those who already bought their dresses like Jobalia and Shewchuk need to figure out what they will do with them. While Shewchuck has already decided to save her dress for her senior prom, other students still have not decided what to do with their outfits.

“I am not sure if I want to return my dress or keep it for next year,” Jobalia said. “Another option is that I might sell it on eBay come time of senior prom.”

Students who have already bought dresses can also consider renting them out for future proms and events. This year, junior Isabelle Lee posted multiple pictures on her Instagram story offering six prom dresses for rent for about $50 each.

“There were a lot of people who were interested in them and messaged me,” Lee said. “However, since proms all over the county were cancelled, we didn’t end up renting anything out.”

Lee rented out dresses because she had many that she does not wear and to help with the cost of dresses.

“Prom is so expensive, and so is buying another dress,” Lee said. “I wanted to rent them out so that I could make back some of the money I spent on them. This way, I felt less guilty for spending so much on something that I would only wear once or twice.”