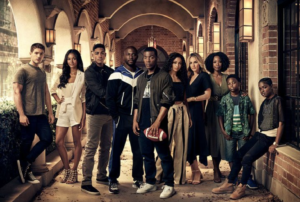 New TV show revolving around football and romance has become popular during time of shelter-in-place.

In the era of shelter-in-place America, we have a lot of free time on our hands. So that has led to seeking more entertainment options.  As we scrolled through Netflix, we came upon a show called “All American,” which was based on the life of Spencer Paysinger and his journey to the NFL.

“All American” premiered on CW Network in 2018 and has two seasonas, each consisting of 16 episodes. We binged-watched both seasons within two days.

The main character of the show is Spencer James — a character inspired by former NFL player Spencer Paysinger, who played as a football linebacker for the New York Giants beginning in 2011 and has since retired. The plot begins by introducing the “hood” life that Spencer came from in Crenshaw, Calif., a largely African American area of Los Angeles.  Because of his football skills, Spencer ends up in a quite different environment at Beverly Hills High School, under the direction of Coach Baker.

This adventurous story of Spencer adjusting to his new life in a new community and school grabbed our interest immediately. As soon as he starts his first day at Beverly High School, he gets to know Olivia, the daughter of Coach Baker, who sticks by Spencer’s side through the duration of the first two seasons. He is faced with the dilemma of balancing his rich Beverly Hills life with his hardscrabble life in South Crenshaw, ultimately creating rivalries on and off the field.

Not only does the story have the touching plot of a hard-working high school football team winning state championships, but the show also exposes the flaws and shortcomings of each character and how these imperfections impact their lives. Each character faces their own problems; for example, Layla, Oliva Baker’s best friend, suffers from mental health issues and doesn’t know where to find help.

Even though the show is mainly about football, it teaches valuable lessons — the central one being that in our society, money plays a huge role in determining a person’s social status but at the end of the day doesn’t equate to happiness or success, seen through Spencer’s two contrasting lives.

“All-American” is an ambitious project with strong themes, but it carries them well — watchers are reminded of the importance of these stories, and as the cast of “All American” tackles these familiar struggles on-screen, perhaps we learn more about ourselves and these problems in our own lives, too.

The third season of “All American” is expected to release on Oct. 4, finally ending the long wait to find out what happens to Spencer as he advances in his football career.