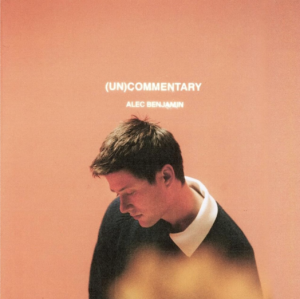 Permalink
In his third studio album, Benjamin presents a versatile tracklist that tells a story through each song and explores aspects of production he hasn’t before.

Four years ago, Alec Benjamin released his hit single “Let Me Down Slowly,” earning him a record deal with Atlantic Records. Ever since he dropped out of high school to pursue a music career, he has released dozens of singles and three studio albums, the most recent being “(Un)Commentary.”

Benjamin is as much a storyteller as a songwriter, often leading with a meaning or message. Past singles like “Boy in the Bubble” and “If We Have Each Other” follow a character’s storyline, complete with music videos to bring the stories to life. Rather than conforming to the mold of a romantic message that most pop songs focus on, Benjamin brings to light meaningful statements about life through his stories.

The new album consists of 13 tracks that each have their own feel and, most importantly, their own message. In an interview on the Zach Sang Show, Benjamin explained that a lot of the songs were inspired by feelings he experienced during the pandemic. He added that it was called “(Un)Commentary” because it’s his unique commentary on fairly uncommon topics.

A track that I fell in love with immediately is “Shadow of Mine,” pre-released in February 2021. It starts with a simple, waltzy piano riff but gradually picks up at the chorus — the melody quickly got stuck in my head. The lyrics explore how past mistakes and demons follow someone for the rest of their life using the metaphor of a shadow that can never be gotten rid of, a message that drew me into the song.

Another of my favorites is “Hill I Will Die On,” which begins with a beautiful guitar riff that continues throughout the song. It comes across as soft yet intense, Benjamin’s signature trait, coupled with a deep meaningful topic that together create a distinctive song.

Benjamin’s uniquely creative thought process is highlighted through the song “Hammers,” which uses the metaphor that every person has a hammer that can either make or break something.

The most underrated song in the album is “Nancy Got A Haircut,” likely because it’s different from anything Benjamin has put out before. On the “Zach Sang Show,” Benjamin revealed that this was the song that really kick-started the album making process for him.

He said that after he saw House speaker Nancy Pelosi getting a haircut make the news, he started thinking about how it’s easy to be envious of celebrities; however, he went on to say that there are many unseen difficulties full of public scrutiny and judgment. The song itself is very boppy, with a bass plucking in the background and a catchy drum beat.

“Devil Doesn’t Bargain” is undoubtedly the most popular track from the album, and one of Benjamin’s most popular songs. He addresses a girl who essentially is trapped in an abusive relationship but still doesn’t want to leave. He urges her, “The devil doesn’t bargain, he’ll only break your heart again. It isn’t worth it darling; he’s never gonna change.” Apart from the lyrics, the production is an upbeat blend of percussion, strings and guitar and suits Benjamin’s voice perfectly.

But above all the rest, the best track on the album has to be “Older.” I remember listening to it when the demo was released back in March 2020 and, from then, it got me thinking about my life and how everything seems to be moving so fast. The lyrics embody a tone of nostalgia that anyone can experience when listening to it, one I’ll likely continue to relate to as I grow up. Benjamin himself has said that he feels like he’s still growing up, which is highly reflected in this song.

“(Un)Commentary” is a versatile album where Benjamin has explored and pulled off music that he hasn’t done before. I’d never been so dedicated to a single person’s music before I discovered Benjamin, and I’m incredibly excited to attend his concert in Oakland this October as an official superfan.