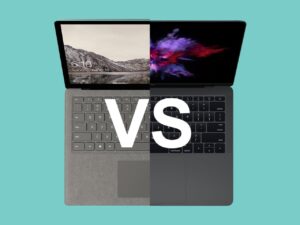 Since the beginning of quarantine, students have spent countless hours attending classes, extracurricular activities and social events — all through their laptops.

Due to an increased reliance on technology, having the right computer has become far more important. Occasionally, students have missed classes and practices due to computer malfunctions, and many are in need of a brand-new laptop that can last through the rest of quarantine, high school and maybe even college.

Whether or not the features of MacBooks justify the significant uptick in price is up to the individual buyer and their computer needs. All buyers must face the now age-old question: Macs or Windows PCs?

MacBooks are generally considered easier and quicker to use once users gain familiarity with the system; they have more functionality in terms of accessibility commands and keyboard customization than that of Windows. That being said, it takes some time to get used to the nature of the laptop, resulting in a steeper learning curve compared to Windows.

For example, there are far more customization options, such as creating a way to automatically change between dark mode and light mode based on the time of day. Using these features will take some time, but MacBooks hand more capability directly to the user, rather than fix it in the back-end directly.

Regardless of the learning curve, however, the flexibility that MacBooks generally offer, including the ability to control trackpad sensitivity and customize keyboard shortcuts, far outweigh the relative ease-of-access that Windows offers.

If users need to make significant changes to hardware such as upgrading or replacing some aspects of the computer (such as memory), they should buy a Windows computer. Additionally, the PC category is considered to be more diverse in terms of hardware needs; buyers can find different computers ranging from gaming to casual use, with screen sizes ranging from 17 inches to 9 inches.

Windows computers’ hardware is far more abundant and cheaper compared to Macs. Comparable computers, in terms of hardware, memory and storage, can cost as much as 40 percent more if they are running MacOS rather than Windows. If someone wants a powerful computer with a strong processor, memory and storage capacity, all for a relatively small price, they can’t do better than Windows.

Additionally, the Internet abounds with Do-It-Yourself (DIY) blogs and articles about how to make hardware changes to Windows computers. This is not true for Macs.

Unfortunately, MacBooks aren’t foolproof. Gatekeeper, Apple’s core security system, has been bypassed before by researchers, and Macs are still vulnerable to web-based viruses, even with antivirus software like Norton installed.

Nilay’s MacBook has been hacked before, despite containing solid antivirus software. Indeed, nearly 30,000 other Macs have been hacked, proving how vulnerable even the strongest systems can be.

However, it’s fair to conclude MacBooks are still considerably safer than Windows PCs from viruses, malware and other forms of computer exploitation.

Both computers have a plethora of basic, built-in apps designed to help perform everyday tasks. These include news, weather, browsers and cameras. They also contain email clients, screenshot tools, file managers and many others.

Microsoft Office and its whole suite of relevant applications are often used professionally in many industries. Windows is better integrated with its applications, which include Word, Excel and Powerpoint.

MacBooks, while not being as integrated with Microsoft, still have their own suite of such applications, which are still highly powerful. These include Numbers, Page, and Keynote.

There are also unique apps in both types of operating systems. Windows computers offer apps like Sticky Notes, Skype and many types of games. Mac users receive Preview, QuickTime Player and iTunes.

Cortana, the voice assistant present in Windows 10, hit the market a bit earlier than Siri. Both can complete basic tasks and functionalities such as controlling apps, setting reminders, sending emails and even controlling smart home devices. Cortana can additionally restart and shut computers down.

Regarding voice recognition, most people find Cortana to be marginally better. Siri oftens distorts what I say, translating simple sentences such as “start a timer” to “star the rhymer.” Although neither is perfect, Cortana narrowly beats Siri and is relatively underrated — especially considering many Windows users don’t even know what Cortana is.

Both computers have also seen a shift towards integrating their mobile devices and operating systems. With Microsoft’s “Your Phone” app, users can share documents and text messages. Unfortunately, this feature only integrates the Windows 10 system with Android devices, while iPhones still capture the majority of the smartphone market in the U.S.

Macs’ mobile device and tablet integration is far better than that of Windows 10. Users can sync up to a nearby phone and access its notifications. Additionally, they have the capability to receive phone calls, FaceTime calls and text messages directly to their laptop. They can even talk over the phone using their computer.

An ecosystem of a laptop is the wide range of interconnected services that an operating system has to offer. It comprises of not only the applications and operating system, but also the device-wide settings and abilities. Generally speaking, it refers to the user experience with respect to the software components of the laptop.

Both Windows and MacBooks have an ecosystem that is centered directly around the user.

Windows’s ecosystem is based upon a center of important tools, such as Command explorer, File explorer, Windows search and Cortana.

The ecosystem for MacBooks is almost identical. Apple’s version of these four products are Terminal, Finder, Spotlight and Siri, respectively.

Aesthetics are one of the MacBooks’ largest selling points: their look is widely considered to be more simplistic, elegant and creative than that of its Windows counterparts.

On the exterior, MacBooks, with their portable design, are generally far slimmer and lighter than Windows computers, which tend to weigh more and have larger screen sizes. As soon as users log in to a MacBook, they are greeted with a desktop and a navigation bar in the bottom known as a dock. When applications load, the icons start jumping, and the whole process of opening an app is far more visually appealing than in Windows.

Both MacBooks and Window computers offer plenty of space to customize user interface and layout. Users can change their desktop backgrounds, screensavers and even the sizes of items on the screen.

However, a key feature to keep in mind is Dark Mode. Both MacBooks and Windows offer the ability for users to shift into Dark Mode, but the key difference is the accessibility of switching.

In MacBooks, the Dark Mode is system-wide, and encompasses all files, browsers and applications. There is also an option of keeping light mode during the day, and automatically shifting to dark mode in the night.

In Windows computers, however, Dark Mode is only possible through a customization update to Windows 10 passed last year, available only to people who have bought a Windows computer recently. Users can choose to darken the colors of dialogs, elements and popups. Unfortunately, this doesn’t work on some older dialogs and applications, and the Dark Mode is not implemented system-wide.

MacBooks are generally considered to be slimmer, more lightweight, more customizable and more aesthetically pleasing than Windows. On the other hand, Windows computers are cheaper, better for heavy-duty work with more easily customisable hardware and have powerful third-party applications.

Additionally, professionally speaking, MacBooks are better for video editing and other creative applications, while Windows computers fare better and more integrated with more classical applications, such as Microsoft Word, Excel and Powerpoint. For many types of jobs and many colleges, users need to familiarize themselves with these tools, which is easier to do with a Windows computer.

The decision of whether to buy a Windows computer or a MacBook depends on individual preferences and needs. While the two types of computers are generally considered to be the best, the differences between them ultimately come down to the price and features offered.