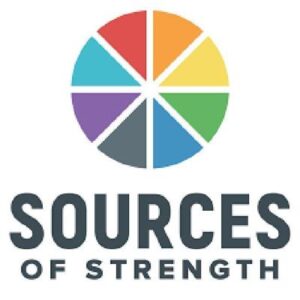 Editor’s note: This story was written before the coronavirus pandemic that closed schools in mid-March.

A group of 50 students gathered around a large rainbow parachute in the MAP Annex on Feb. 26 to play a game that taught them about balancing elements of their mental health. These students, who received letters of nomination in early February, will serve as peer leaders for Sources of Strength, an outside program that Common Roots has brought on campus.

Common Roots was first established in 2012 to spread positivity on campus and provide peer-to-peer counseling for students. The club merged with Sources of Strength in 2014 as a way to establish a tighter, more professional network of support among students.

According to the Sources of Strength website, the organization aims to provide assistance for those dealing with  suicidal thoughts, violence, bullying and substance abuse. The program attempts to accomplish this by training adults and students, known as peer leaders, to “impact their world through the power of connection, hope, help and strength.”

“We saw a lot of good come out of the training in the years that we did do it, so we thought it’d be cool to bring it back,” Hsu said. “It’s been a long time since I’ve done it myself, and I'm the only person who has done it before and is doing it again, so I’m really excited to see what it’s like.”

The peer leaders were nominated by their teachers and met in the MAP Annex for their first meeting. Led by Daly and two Sources of Strength workers, the students played games that tied into discussions on topics such as noticing concerning changes in a peer’s behaviors, junior Tabitha Hulme said. Aside from teaching students how to adopt healthier mindsets, the workshop also focused on learning to balance different support systems, like friends and healthy activities, in order to lead a stable, emotionally healthy life.

At the end of the meeting, the group discussed ways they could impact the school through social media, school-wide events and celebrations. For example, Hulme, who was placed in the social media group, said they brainstormed how they could use their platform, hashtags and challenges to spread mental health awareness.

Despite initially having doubts about the program, Hulme said she found the training enjoyable and looks forward to serving on the team.

“Going into it, I was skeptical because I thought that I was supposed to be doing the job of what I expected my counselors to do,” Hulme said. “But now, I think it’s a great opportunity for me to communicate better with my peers and understand if they’re going through something. If they want to get help but don’t know how, I can lead them in the right direction.”

Going forward, Sources of Strength will hold monthly meetings during tutorial in Daly’s room, where the peer leaders will continue their training and discussions on how to make the school environment a more welcoming and inclusive place. They also hope to organize events and open a social media account for other students to reach out to them.

Junior Irika Katiyar said that she hopes she and her fellow peer leaders can translate what they learn into helping other students manage their emotional struggles.

“I think what we do is important, especially with our school being so academic,” Katiyar said. “It’s a pretty high-stress environment, so it’s good to know how to have a good mindset and not always get so stressed about grades or academics. I hope to really get others to feel more a part of the school and feel like they have a reason to be here, not just for grades.”