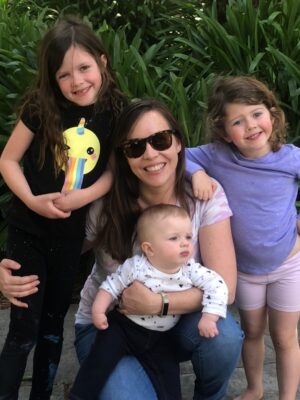 English and World Geography teacher Susanna Ryan reflects on her six years at SHS and the impact the SHS community has had on her.

At first glance, Room 003 may seem like the characteristic English classroom — grammar posters and student projects decorating the walls, stray copies of “Cyrano de Bergerac” lying on desks — but current and former students know that English and World Geography teacher Susanna Ryan’s classroom is a warm, welcoming space for all who enter.

But come next school year, Room 003 will be occupied by a different teacher. After teaching at SHS for six years, Ryan will move to Huntsville, Ala., for her husband's job as an operations manager in the defense industry.

While the decision to move was difficult, Ryan said that the more affordable living costs and proximity to her children’s grandparents and her brother’s family in Georgia will be worth it.

Despite these benefits, Ryan said saying farewell to SHS will not be easy.

“If it weren't for our family being so far away, I would gladly stay at SHS my entire career,” Ryan said.

Ryan started her teaching career at the undergraduate program at the College of William and Mary in Virginia. She transitioned fresh out of college to teaching English 10 Honors, English 11, Creative Writing and AP English Literature at Falls Church High School in West Falls Church, Va., for nine years, and she taught a composition course at Northern Virginia Community College for one year afterwards. In 2014, Ryan moved to San Jose for her husband’s career and began teaching at SHS.

After the move, Ryan plans on taking a year off to be at home with her infant son and help her two daughters, both early elementary age, get adjusted to their new schools. Ryan has already started scoping out high school teaching positions in Alabama but acknowledged that it will be challenging to adjust to a new school.

“I never thought I could love another school more [than Falls Church], and then I came to Saratoga,” Ryan said. “I'm now convinced that high schools are all pretty incredible in their own right, and I just hope I find one I love half as much as this school.”

Growing up with parents as officers in the U.S. Foreign Service, Ryan is accustomed to big moves across the country, but she said that this move will be especially challenging because she will leave behind a close community of students and colleagues. She said spending the rest of the school year in remote teaching made the transition even more difficult.

“We know that many people have it much harder than we do, but my daughters and I are each grieving the fact that we have to leave our school communities without the chance to really say goodbye,” Ryan said.

Despite the distance, Ryan is grateful for the time she spent with her students face-to-face, noting how vivacious class discussions and group projects are a constant source of entertainment. She described teaching high school students as an “honor” and “source of neverending laughs.”

Junior Aarya Pandit, who had Ryan for World Geography as a freshman, recalled how she gave the class weekly current event quizzes. In one instance, Pandit struggled on one question that asked who was named the TIME magazine person of the year.

“I didn’t know the answer so I just put Aarya Pandit as a joke, and she marked it correct,” Pandit said. “I told her about it later, and she laughed it off and ended up giving me points anyway because she thought it was funny.”

Ryan also cherishes the connections she made with her colleagues and cites their enthusiasm, collaboration and dedication as continued sources of inspiration.

“It has meant the world to me to work alongside teachers and staff who care so much about their work and who both push one another to do better and support one another along the way,” Ryan said.

Assistant principal Kerry Mohnike, who worked closely with Ryan on the Social Emotional Learning team on events such as Breaking Down The Walls, described Ryan as an ardent advocate for fostering meaningful connections among staff, students and their cohorts alike. Mohnike also said she admires how Ryan brought her love of language to her students every day.

“Certainly I will miss her utter commitment to doing right by her students in all ways,” Mohnike said. “That doesn't just mean teaching them English language skills, but in sharing her belief and compassion for the equality of all.”

Ryan joined the SEL team after starting training with PassageWorks, an organization that she joined during her first year at SHS that emphasizes social, emotional and academic learning while creating an inclusive and engaging classroom environment.

According to Ryan, she was intrigued by the organization's values of inclusion and empathy that “really jibe with my teaching style.”

“I love how students light up and loosen up when they feel cared about and accepted,” she added. “There’s nothing better.”

Ryan’s empathy is not the only thing that students and teachers knew her for. For her students, Ryan will be remembered as a passionate teacher who valued personal connections, even if it was just saying hello to them in the hallway or inviting them to her classroom during tutorial to catch up.

“Even though I did not have Mrs. Ryan in my sophomore or junior year, I still stopped by her classroom about once every two weeks to talk with her,” said junior Jason Chin, who had Ryan for English 9. “She always has things to say about her children, and she always shows us photos of them.”

Junior Tabitha Hulme, who also had Ryan for English 9, said she fondly remembers Ryan’s knack for bringing out the best in her students.

During the class’s Shakespeare unit, Hulme recalled how Ryan would always call on Hulme to read the part of Juliet in “Romeo and Juliet” in class, despite the fact that Hulme was too anxious to volunteer.

“I remember one day after class she came up to me and told me that she continued calling on me in class because she could hear the confidence in my voice after every turn,” Hulme said. “She said I had this natural-speaking voice that was strong and powerful. She saw a lot of potential in me that I did not see in myself, even as a freshman.”

Ryan looks forward to coming back to visit after the COVID-19 pandemic, noting that she will remember the SHS community fondly.

“I've had so many models here of the kind of person I want to be, not just as a teacher but more generally as a human,” Ryan said. “I am forever changed by the compassion, work ethic and community embodied here at SHS.”