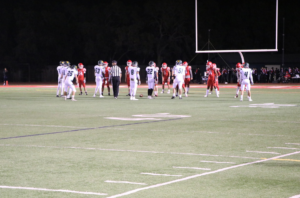 The Falcons lost 28-20 in a home game against Leigh.

After qualifying for CCS last season, the Falcons looked to get off to a strong start in their four preseason games. But after one blowout loss and three close losses in the past month, they are limping into their first league matchup in an away game against a talented-loaded Milpitas team tonight.

The Falcons were routed by the Half Moon Bay Cougars and lost close games to the Silver Creek Raiders, the Santa Teresa Saints and the Leigh Longhorns.

Their latest game was a 28-20 heartbreaker loss at home on Friday to the Leigh Longhorns, who came into the game undefeated.

Early on, however, the Longhorns seemed like a beatable opponent. Besides allowing a touchdown on their first drive, the Falcons’ defense held the Longhorns at bay, and the score was tied at 7-7 at the end of the first quarter after a touchdown pass by quarterback Niko Rositano to senior wide receiver Will Turpin. The score remained tied until halftime.

The Falcons’ offense came out strong in the third quarter, with Rositano throwing two touchdowns, both to senior wide receiver Harrison Fong. Their defense also held the Longhorns to no points, getting a fourth down stop and an interception.

The Falcons led by 13 going into the fourth quarter, but then they started to stumble. The Longhorns completed a 47-yard touchdown pass to cut the deficit to 6, and then the Longhorns intercepted Rositano and returned it for a touchdown, giving them a 1-point lead with 9 minutes left.

The Falcons’ offense could not capitalize on multiple opportunities, including one that came off an interception.

On one such opportunity, Rositano wasn't able to convert on a fourth and 10 on their own 19-yard line, giving the Longhorns excellent field position. Leigh scored on a 10-yard rushing touchdown, and extended its lead to 8 with about a minute to go. On the final drive, the Falcons were unable to score as time ran out

In the Falcons’ third game against the Santa Teresa Saints on Sept. 8, they looked much sharper on both defense and special teams, their weakest links in their previous games. The teams went head to head, with the Saints ultimately winning 21-14.

The Falcons turned their defensive woes around in their second game against Silver Creek on Sept. 1, as they came out strong and quickly put points on the board.

Their defense also came through as they held the Raiders to only one touchdown throughout the entire first half. Going into the break, the Falcons held a 21-7 lead.

The offensive line also did their part blocking for Rositano, allowing him to throw two touchdowns in the first quarter, something he wasn’t able to do much in the first game.

“We knew that they were going to come out and blitz us based on the film they watched, but we worked with our offensive line and were ready for it,” head coach Tim Lugo said.

In the third quarter, the Falcons’ defense started faltering as it gave up two touchdowns; however, their offense made up for it, going head to head with the Raiders to keep their lead at 14 going into the fourth quarter.

But in the fourth quarter, the Falcons stalled. Their offense was only able put up a single field goal while their defense gave the Raiders multiple scoring opportunities that allowed the opposing team to score 20 points in the fourth quarter, including a game-tying touchdown off of a muffled kick reception with about four minutes to go in the game.

Rositano and the offense got the ball back with enough time to try to score, however, on the second play of the drive, a Raiders linebacker made adjustments to a Falcons’ offensive play and came underneath the pass to intercept it.

With great field position, the Raiders were able to score a field goal, making it 41-38, with only 19 seconds left on the clock. Rositano attempted a few Hail Mary passes as time expired, but none of them were completed.

“There were some controversial calls, but in the end, we lost because of self-inflicted mistakes,” Lugo said. “We gave up three fourth quarter turnovers which allowed the Raiders three more possessions to get back into the game.”

Lugo noted that the Falcons played a solid game both offensively and defensively, but it was really their special teams gaffes, on kick and punt returns that hurt them.

In their season opener, the team lost 63-7 to the Half Moon Bay Cougars at home on Aug. 25. Although the Falcons fought until the end, it was not enough to beat the two-time defending CCS champions.

The Falcons say they haven’t given up hope.

“We’re working a lot harder changing things around during practice,” said senior captain and linebacker Alec Lindeman. “We’re trying to put the preseason past us, our motto right now is that we’re ‘0-0’ and that the preseason doesn’t matter anymore, it’s all about league now.”

Lugo still has confidence in his team’s ability to win games heading into the regular season, attributing the their early struggles to both their team chemistry and injuries along with the time needed for new players to get adjusted to varsity competition.

“Once we get that first win under our belt, I think everybody will relax,” Lugo said.