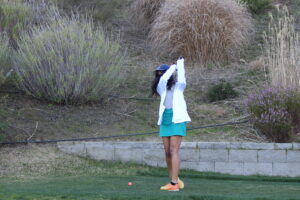 After losing four out of six of the travel team members to graduation, the varsity girls’ golf team worked to rebuild its lineup as one of four Season 1 sports.

With the two returning players on the travel team, Savannah Lin and Jane Loo, taking the top two spots, this year the team includes four new starters, senior Ananya Sekharan, juniors Harshini Velchamy and Melody Li and freshman Alicia Nguyen. With four matches left, the team had a record of 1-3 as of March 19, with their one victory coming against Los Gatos on Feb. 22.

“This year’s team is very young and inexperienced,” said coach Dave Gragnola. “Only a few players had played in matches, so it was clear that we would struggle to win many games.”

While the team started off strong with a win against Los Gatos, the players found it difficult to compete against some of the stronger teams in the league such as Lynbrook, Palo Alto and Monta Vista — the three teams they have lost to. Instead, they have aimed to focus the brunt of their energy on training the less experienced players to better prepare for future seasons and building a more team-like environment.

“I want to try and get the players to get to know one another and become a team that likes and knows one another,”  Gragnola said. “My goal is to get the newer players on a path to improvement and to focus on the players’ weaknesses. I want them to finish the year with more skill than when they started in February.”

However, with the restrictions placed on the team due to COVID-19, being able to practice has been more challenging than in previous seasons.

Due to an increase in people playing golf during the pandemic, the Saratoga Country Club, where the team practices, has become a lot more crowded, and use of the course’s facilities have been limited for the team.

“We’re mostly limited to the putting greens on most days,” Loo said. “We only play on the course once all the members are gone and we’re only allowed to use two mats in the driving range at a time.”

Despite these obstacles, Loo said she was grateful for the chance to have a season this year, not only to compete but also for the increased social interaction that playing in sports allows.

“My favorite part of this season is just [being able] to see people again,” said Loo. “With COVID-19, I didn’t see people from school for the past year and it feels great just to be with your friends again.”