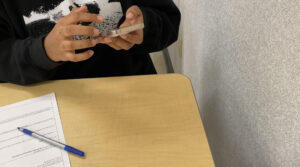 A student poses in a scene from one of the informative PSAs that will be sent out for the campaign.

Permalink
Students enlisted to speak about the value of taking the right path.

In response to complaints of rampant cheating in online learning this year, the administration has launched a campaign to encourage students to ponder the effects of their actions and make better choices. It began with a slidedeck students went through during the asynchronous advisory period on May 4.

“This is not so much about catching cheaters as it is about educating students on the value of being honest in their work and what that means to both the student’s immediate and future learning,” assistant principal Kerry Mohnike said. “Mostly, the campaign is to encourage students to develop and honor integrity in their personal and academic lives.”

The campaign consists of a series of minute-long public service announcements (PSA) surrounding the issue of academic integrity. The goal of the campaign is to send one PSA out over each of the remaining weeks of the school year, beginning on May 10.

The main lesson presented in the PSAs is the importance of personal integrity. In order to make the PSAs more relatable, the administration has also reached out to students to help create them, with anyone interested in being able to participate in acting or filming the videos.

According to Mohnike, the biggest problem regarding academic integrity during remote learning is the fact that many students are tempted to cheat via the internet or with their peers.

“This campaign is mostly directed at the students who may think that everyone is doing it, and who don’t understand why a little cheat sheet, a second device to look up answers or sharing screenshots of test questions with friends is such a big deal,” Mohnike said.

Despite these temptations for students to cheat while taking tests at home, Mohnike is optimistic that the campaign can be effective in encouraging them to make the right choices.

“I think most students are honest and use the utmost integrity in their work,” Mohnike said. “Sometimes, people just need a reminder to be their best selves.”