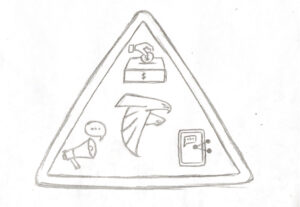 Permalink
Through communication via their own social media chats, parents groups organize events, support the school through boosters and share their voices to influence school policy.

From the paint-splattered aprons of elementary school art docents to the sizzling hot dogs of high school barbecues, parent involvement is present in every facet of school life. Parent groups volunteer their time for activities ranging from Graduation Night committees to club boosters, and everything in between.

As stakeholders in their children’s education, parents often band together to form groups to discuss, fundraise for and impact the school environment. Through their participation, parents are able to create change within the system in the form of booster groups, social media and policy advocacy.

“This is the beauty of the Saratoga community, that parents [truly] care to support school activities,” said parent Jessica Liu, mother of senior Christopher Liu. “Being a mom, I watched almost every single basketball game for my two boys in the JV and varsity teams. I want to be their supporter: On the court or as benchwarmers, my boys know I’m always there to watch them and show my love and support.”

Parent Rita Cao, mother of senior Tiffany Wang, observed that due to public school funding issues, the school’s various clubs and activities rely on financial support from parents and the wider community. At the start of every school year, parent-run organizations distribute a folder of donation requests to students at Falcon Fest, the school’s annual textbook and schedule pickup event.

“Many extracurriculars in the school cannot be carried out if no parents donate money and do volunteer work,” Cao said. “The good of the community comes from the joint efforts of all.”

Parent Anu Minocha, mother of seniors Kaasha and Kaaya Minocha and a member of the Foundation, described it as the high school equivalent of the Saratoga Education Foundation (SEF) in the elementary and middle schools. The organization helped fund the Wellness Center as well as campus improvements such as $253,000 for purchasing new desks and quad picnic tables, $60,000 for rolling bleachers for ASB events and $75,000 for the Talkspace online therapy program and CASSY counselors.

Similar to the Foundation, the PTSO also raises money for special events such as Teacher Appreciation Week luncheons and Food for Finals. PTSO president Grace Hu, mother of sophomore George Hu, noted that the Foundation and PTSO often work closely together, especially when teachers or programs need grants or additional funding.

“Some programs not funded by the school send in requests to PTSO and the Foundation,” Hu said. “We then see whether that request goes to the Foundation or the PTSO. For any that go to us, the PTSO board votes to approve or deny the request.”

According to principal Greg Louie, the six booster groups obtain money through a combination of fundraising events and donations — such as the music booster’s Pancake Breakfast, which occurs annually on May 1 and supports the music program at both Saratoga High and Redwood Middle.

Expenses for the music program are high for trips such as the one it is taking to  Europe this summer. Louie, who attends booster group meetings monthly, noted that parents helped take some of the brunt of logistical work off of the school’s music department by helping to organize fundraising and paperwork. Some groups have even achieved 501(c)(3) nonprofit status after being officially approved by the IRS as a tax-exempt charitable organization.

From paying the costs of music trips to purchasing robotics equipment and Media Lab computers, parent groups play a crucial role in keeping extracurricular programs afloat, he said. The  learning opportunities students have access to here, such as MAP’s collaborative project-based instruction, are  rare in many other public schools.

“It is very common for relatively high achieving, affluent schools,” he said. “In a [less privileged] socio-economic environment, those opportunities for students may not necessarily be there.”

Louie said it also takes a special level of dedication for the parent community as a whole to keep booster groups and their respective programs running. Although parents who play key roles may graduate from the school alongside their children, the groups they were active in are handed off to someone else and continue to thrive, he said.

“It’s become a part of our culture,” Louie said. “It’s a pretty awesome legacy for whoever originally started these groups. When it comes down to it, the long-term sustainability [of these programs] is all because of the parents.”

For example, on a typical day in the “SHS Class of 22(Parents)” chat on WhatsApp, the 151 parent members might be discussing anything from graduation leis to their experiences with SAT and ACT testing, Minocha said.

“Parents are very active on WhatsApp,” she said. “There is a lot of support, in the sense that you could ask questions and get answers from others.”

For parent Vandana Prabhu, mother of a seventh grader at Redwood Middle and sophomore Tara Natarajan, social media groups are a useful resource for parents looking for advice, especially for newcomers to the community. She said she sees a trend in what parents tend to talk about — while middle school parents frequently ask questions about homework or general advice, chats with high school parents are often more focused on school events instead.

“[Parents of high schoolers] have been around for a while, so they don’t need to reach out as much,” Prabhu said. “They’re more aware of what to do or who to talk to. In middle school, you still find parents asking ‘What’s a good summer camp?’ or ‘Does anyone have recommendations for doctors?’ but the sophomore parents talk mostly about announcements for buying tickets to the school play or supporting music boosters.”

Hu added that parent social media has helped connect people as a community. For example, there are multilingual parents who translate Louie’s Friday newsletter and PTSO’s Monday newsletter into languages such as Mandarin to support parents who struggle with English. They then advertise the translations in the parent Wechat groups.

Hu also noted that social media is a platform where parents of underclassmen can seek advice from parents of upperclassmen on which courses to select or which college counselors to hire.

“They want to get those kinds of opinions,” she said. “I think it’s worked quite well where parents help each other, especially when the senior parents are open to give some pros and cons.”

Louie said there are many methods for parents to express their opinions on policy to the administration, including by attending board meetings, talking to board members during their office hours and sending emails to Louie to set up meetings.

In addition, parents can address concerns at meetings for parent groups such as the SHS Foundation, PTSO and school site council, which Louie typically attends once a month.

The school site council — a group consisting of representatives of parents, students and staff — drafts and monitors the annual School Plan for Student Achievement (SPSA) and the annual Safety Plan. Although the council is not directly responsible for school policy, public meetings are yet another platform for parents to make “strong recommendations” that can be taken into further consideration, Louie said.

In addition, Louie and superintendent Michael Grove sometimes hold meetings with the presidents of such boosters and other groups to discuss school affairs and ask for opinions and suggestions. For instance, Louie said that a parent passionate about improving the school’s recycling is “really pushing” to help figure out ways to encourage students to properly sort their trash and recyclables; this prompted communication between him and that parent to further the school’s environmental values.

Through these various means of opening dialogues with school and district officials, parents have power to influence policy.

Prabhu, a member of Saratoga High’s Culture and Climate Committee, has seen parent-driven changes in school policy — some she has even been a part of. Through her involvement in parent groups and school committees, such as a group called Change Makers dedicated to revising the gender-specific language in Redwood Middle’s dress code, she had the opportunity to work with many parents and learn about the inner workings of the district and board, she said. She realized there are many ways to get policy changes onto the district or board’s agenda.

“It may or may not happen, but you want to at least bring that onto their radar,” Prabhu said. “Because most board members don’t have kids currently in the district — especially the high school board — there’s a disconnect between what they might perceive is good for students, and what the reality is.”

In addition, Prabhu has worked to raise awareness for supporting teenagers’ mental health issues, especially during the pandemic last May. She was outspoken in favor of schools reopening in order to bring students back into a social environment instead of online isolation, she said.

She also came into contact with a group of other parents that she recognized from the board meetings and exchanged notes with them on what methods they were using to enact policy change.

However, community members also think that parent voices may overpower those of other stakeholders like students and teachers in decision-making. Parents and students often held clashing opinions when it came to issues such as school reopening, according to senior Johnny Hulme.

Hulme, who attended board meetings during last year’s Phase 4A of reopening, observed that numerous students spoke up during board meetings in favor of continuing “Wellness Wednesdays” through the next phase of reopening, citing their mental health benefits. However, Hulme said that some parents, especially those from Los Gatos, pushed for a full five-day week.

“It was very disappointing to see that the board didn’t listen to the students,” he said. “Lots of times, the board encourages students by telling them to use their voices and voice their concerns, but in this case their actions speak louder than words, as it seems like they put parent interests over student interests.”

Math teacher Kristen Hamilton also noted that during the pandemic lockdowns, some parents regularly voiced their opinions at the school board. Though the superintendent and school board have the final authority on decisions for reopening or aligning schools, they “can be blinded by the loudest or angriest people in the room as that is human nature.”

Hamilton said that teachers hope that their voices and opinions are also taken into consideration, especially since they are educators with degrees in their subject and years of experience in the classroom.

Parent Rita Cao ultimately finds that the school works to balance the interests of all parties, who share the common goal of raising healthy and responsible adults, she said.

“There is one saying that it takes a village to raise a kid,” Cao said. “It is true: The more parents are involved in school, the more they understand the school’s culture and the origins of various policies, the more they can cooperate with the school, and in turn the more the school respects parents’ perspective.”