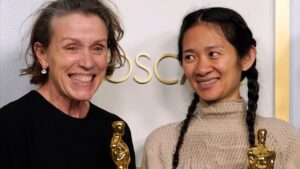 After a desolate year void of fun blockbusters but full of depressing dramas and a lengthy delay, the 93rd Academy Awards (Oscars) finally arrived on April 25— but did not land well.

Quite frankly, as a whole, 2020 was a horror show for movies: Almost every major motion picture was delayed, leaving behind a crop of B-rate movies (most of the released movies were about equality or had diverse casts and most of the delayed movies had white protagonists, but that’s a conversation for another time).

With that in mind, all the Oscars had to do was match the energy of its nominees, a low bar for Hollywood’s most extravagant event. After the Golden Globes — which were roiled in controversy and taken off the air for 2022 — the Oscars just had to put on a regular old show. But clearly, that was too much to ask for.

But first up: the winners.

Disney’s “Nomadland” took home the Oscars for Best Picture, Best Director (Chloé Zhao) and Best Actress (Frances McDormand). “Nomadland” wasn’t my pick, but the movie was undoubtedly well-made — I was hoping for Netflix’s “Trial of the Chicago 7,” a gut-wrenching courtroom drama that echoes tightly with the 2020 political atmosphere as it depicts civilian unrest and police brutality.

“Nomadland” picturesquely captured the life of American nomads and beautifully told its story in a documentary-like way, featuring real-life nomads as actors. It was also great to see Zhao, a Chinese woman, win an award that has been historically given to white men.

Other highlights included Disney’s “Soul” winning Best Animated Feature and Emerald Fennell winning Best Original Screenplay for Universal’s “Promising Young Woman.” Both movies were great, but “Soul” should have been nominated for Best Picture because of its message about purpose and relevance to depression during the pandemic (dear Academy, start nominating more animated movies!).

Overall, the winners and nominees at the Oscars were applaudable. Given its crop of movies, the Academy, for the most part, awarded top awards to deserving nominees.

One catastrophic mistake, however, was the Best Actor award. Anthony Hopkins won his second Oscar for his role in Sony’s “The Father,” beating the late Chadwick Boseman for his role in Netflix’s “Ma Rainey’s Black Bottom” in an upset.

The mistake was not Hopkins’s win; he was fantastic in “The Father,” portraying an old man struggling with dementia. But the Oscars broadcast opted to present this award and Best Actress last instead of Best Picture, which is always seen as the most important award and should always cap the night.

It was an odd choice, which was later clarified to be a risky gamble by the show’s producers that the late Chadwick Boseman would win Best Actor, allowing for a sad tribute from his widow to end the show.

If Boseman had won, it would have been a heartwarming choice and a perfect end to the awards. But he didn’t. And because Hopkins is 83 and overseas in Wales, he did not wish to travel and wanted to Zoom into the show — which producers of the Oscars refused — so Hopkins was sleeping during the telecast.

Aside from ending the film industry’s most important night in the most anticlimactic way — without any speech or thank you — the choice to present Best Actors last was nonetheless wildly problematic. The optics of using Boseman’s widow’s trauma to increase ratings of a dying telecast are beyond redeemable, especially after the show proved it didn’t respect the dead by speeding through its in memoriam segment.

The moment underscored the largest problem with the Oscars: an outright unwatchable telecast.

Anyone who has seen an awards show will say that “the never-ending speeches are the worst part.” The director of the Oscars, Steven Soderbergh — who notably directed “Ocean’s Eleven” and “Contagion” — did not get this memo.

Instead of deprioritizing award speeches and focusing on the movies — as I argued for in my review for the Golden Globes — the Oscars organizers decided to turn their sketches and presenters into award speeches.

I’m sorry Regina King, you’re a very talented artist, but I’m not particularly interested in your rushed, half-handed biographies of the screenplay nominees. Bong Joon-ho, if your speech was pre-recorded, why was a translator necessary? You just needed to caption your speech.

I’ll make exceptions for director Thomas Vinterberg, whose story of losing his daughter in car accident was heartbreaking, as well as actress Youn Yuh-jung — who rightfully called out Brad Pitt for not visiting the set of A24’s “Minari” — which he produced (must’ve done a lot of work, Brad!). Though their speeches lasted about 3 minutes, they were moving and entertaining.

The monologuing presenters were made worse by the omission of movie clips of each nominee in each category. In last year’s show, clips from the nominees for Best Visual Effects were played so viewers could see the before-and-after of how Visual Effects (VFX) and Computer-Generated Imagery (CGI) affected each movie. This year, viewers only got an explanation of each nominee’s plight. It may just be me, but I watch the Oscars for the films, not elitist sob stories.

The stage design — usually an elaborate Swarovski setup at the Dolby Theater — looked like a Fortune 500 company’s luncheon for executives. The show was also presented in a widescreen ratio that made it look like a movie, but in reality, only further disconnected the audience from the show.

The show even went so low as to play a futuristic song with the two word lyrics, “MAKE UP,” after Netflix’s “Ma Rainey’s Black Bottom” won the Oscar for Best Makeup and Hairstyling. Music from each film’s respective score was perfectly fine and nobody asked for EDM music; it’s the glamorous Oscars, not the Consumer Electronics Show.

There were a lot of wrongs with the show. But for all of its pitfalls, there were also highlights.

The Oscars managed to leave the pandemic in the rearview mirror, something that every other awards show other than the Grammys has been unable to do. The production was a real party with stars all assembled on an actual red carpet; it was a welcoming sight after so long.

The Academy also made sure to highlight the bedrock of film: moviegoing and theaters. In their everlasting speeches, presenters told stories of their most memorable movie experience and reminded the audience of the theatrical experience that made the Oscars what they are.

The Oscars also inserted an at-first questionable “is this song an Oscar nominee, winner or neither” segment that felt like a game show (again, does not belong at the Oscars) but somehow worked.

Glenn Close was the highlight of the show, putting her knowledge and dance moves of “Da Butt” on display. While it was later revealed that the entire bit was staged, the moment was still fun.

All in all, the Oscars were a massive miscalculation with little highlights in between. The telecast violated the basic principles of “show, don’t tell,” ignored all lessons from previous broadcasts, ruined classic elements and spectacularly botched the ending. It escaped the pandemic and promoted movie theaters, but that’s not enough to save a ship as sunken as this year’s Academy Awards.

As I said with the Golden Globes, here’s to hoping the Academy and ABC learn from the failures of this show. Movie theaters are finally opening and blockbusters like Paramount’s “A Quiet Place 2” and Universal’s “F9” are coming with them. Let’s hope next year’s Oscars can properly celebrate the triumphant return of movies in the coming months.