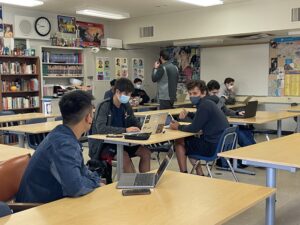 When Phase 4A hybrid education having started on May 3, many seniors — many of whom traditionally use their second semester to take a break from school and relax after a stressful college application season — were so burned out by online learning that they opted to go to school in person, even if it meant not sleeping in and having to get dressed up for the day.

“I was super unmotivated after being online for so long, so I decided to come back at first for Phase 3B and now for 4A to get out of the house and force myself into a routine,” said senior Riya Jain. “I ended up really preferring being in-person to interact with my classmates and teachers, so I gave up the comforts of 15 minutes of extra sleep to come in person.”

This increased interaction is what Jain and other like-minded seniors say they were missing from their high school experience in the past year. She pointed to her AP English Literature and Composition class as an example of online learning challenges, where Socratic seminars on Zoom often had full minutes of silence or students awkwardly talking over each other.

“The first time I worked with a group of students in-person in AP Lit was mind-blowing because I forgot how naturally conversations can happen and how much I actually benefited from getting to bounce ideas off of other people,” Jain said.

“When I’m at home staring at my computer, I end up just looking out the window a lot of the time,” Overby said. “I don’t really pay attention to Zoom because listening to a teacher talk through a screen for hours is boring.”

Overby also found that the learning environment is much more immersive in a classroom than it is at home. As part of the end-of-the-year review in AP Physics, teacher Matt Welander has done many demonstrations to  illustrate key concepts. Overby found it easier to grasp the concepts in-person compared to watching on a shared screen.

The benefits of in-person learning extend beyond the classroom, senior Cameron King said. In addition to being able to concentrate better in a real learning environment as opposed to his room, he missed the human interaction of simply being around others.

“The obvious advantage to going in-person is being able to interact with and see friends, but it also gives me a chance to talk to my teachers about random things going on in our lives that aren’t related to school,” King said.

Now that about half the senior class has returned to school, they can converse and joke with friends face-to-face for the first time in months. Friend groups can now be found hanging around outside their favorite classes or in old meeting spots.

“It’s nice being able to talk to friends,” King said. “I think the effect of being able to hang out with each other on a daily basis is really underrated.”

Despite all of these benefits, a drawback of both hybrid learning, according to Overby, is the divide of teachers’ attention between their in-person and online students in the current simulcasting model. In some classes, where groups consist of a mix of both online and in-person students, there have been difficulties collaborating between students.

The continued use of laptops in classes even in person came as a surprise to Overby, who had assumed that in-person students would be doing separate activities than those on Zoom. However, this was not the case, and led to frequent communication issues between those in person and at home.

Even so, many seniors returning to school for the last few weeks of high school said that the benefits of in-person learning — higher engagement, social interaction and more —  far outweighed the disadvantages.

“I am glad to see the enthusiasm of my teachers and how excited they are to see people come to their classes in person and how much they enjoy teaching,” King said. “I know we’ll be able to go back to normal soon.”