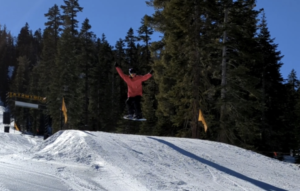 Kyle Scola hits a jump off a ramp at the Northstar slopes while snowboarding.

Almost every week in the winter, sophomores Amaris Charton and Kyle Scola make the 5-hour commute to slopes in the Tahoe area.

Frequent skiers like Charton and snowboarders like Scola have an unconventional lifestyle compared to many high school athletes. Balancing school and the many difficult aspects of skiing at a high caliber, their passion for the sport comes with both unique challenges and triumphs.

Charton began skiing at age 3. She has since attended multiple competitions for downhill and jump skiing.

“Skiing differentiates itself from other sports because there’s so much liberty behind what you can do,” Charton said. “While most sports have set rules on how to play, with skiing you can be free on the slopes.”

Charton’s favorite resorts are at Kirkwood, located at a higher base elevation compared to other popular ski destinations like Squaw Valley and Northstar. Kirkwood offers various advantages including higher average snowfall along with smaller crowds because it is slightly south of the Tahoe region.

Recently, Charton has attempted to refine her 360s and learn to slide sideways across rails.

“Sometimes you can get a little scared as the adrenaline builds up when you go for a big jump or a spin,” Charton said. “My tip is to go for a smaller initial movement to warm yourself up before you go for a massive trick.”

One terrifying experience occurred when Charton found herself stuck at the edge of a cliff where she ended up having to cautiously climb and ski down, taking care not to hurt herself on the hard rock face.

“Skiing can be scary at times and it really pushes you to your limits, but you learn as you go, and gradually what once seemed impossible earlier on becomes a piece of cake,” Charton said.

Scola also started on the slopes at an early age. After learning to ski at age 5, he moved on to snowboarding when he was 10, following in the footsteps of his father.

“I gradually developed an interest in snowboarding over skiing because of the fluidity of motions and because I also enjoyed surfing and skateboarding, which are both very similar,” Scola said.

Like Charton, Scola regularly heads to the slopes at Northstar at least once every two weeks. Thanks to the convenience of owning a cabin in Tahoe, Scola’s family is able to streamline the travel process and make the most of their time there. Similarly, Charton’s family owns a cabin in Kirkwood, which eliminates a host of inconveniences during their stay.

Because of their years of experience, Charton and Scola have found that learning from experience and maintaining consistency are the most compelling pathways to success. Scola’s word of advice for newbies on the slopes is to learn to prioritize safety over everything else.

One of the biggest causes of injuries Scola witnesses on the slopes is skiers colliding or falling because they are unable to come to a fast and safe stop.

“Stopping is crucial towards safety and it’s essential that beginners learn how to properly and safely come to a stop on flats, and downhill slopes,” Scola said.

“Skiing has really helped shape who I am as a person,” Scola said. “The various experiences and memories I’ve made are something that I’ll cherish for a lifetime.”