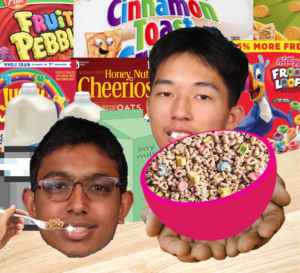 Ah, that magical first bite of a new cereal, so many secrets to be discovered, so many new experiences just waiting inside that cardboard box. However, there are some that will put a hop into your step and others who will make you want to throw up. Here are our opinions on a few cereals we’ve tried:

Honey Nut Cheerios are an all-around solid cereal. Normal Cheerios might be awful and bland, but a touch of honey makes everything better. Even after you finish eating the cereal, the honey milk that is left over is still a beautiful combination. Honey Nut Cheerios have a perfect balance of sweetness and should be the industry standard. 4/5.

Toasted Wheatfuls taste like rubbery sponges dunked into a bowl of milk. They suck up all the milk and leave a soggy, bland mess that’s no longer toasted. Eating it without milk, however, is like eating a spiky ball made of sand. Your soul will deflate everytime you take a bite of it and please, don’t start your day by spitting out your cereal into the trash can. 1/5.

The rainbow-colored fruit loops are an iconic cereal. The flavor it packs certainly lives up to its reputation, and every bite is like an explosion of flavor. The cereal is crispy and crunchy when dry but quickly softens into mush when mixed with milk. However, the cereal is a bit too tangy on the mouth and isn’t as visually stunning as advertised. Regardless, the cereal will still be a real treat if you can eat it quickly enough. 4/5.

The marshmallow charms taste incredible, there’s no doubt about that. The cereal itself though? Not so much. They taste a bit bland and grainy, and leave a bit of an unpleasant aftertaste. Additionally, the marshmallow charms are far too rare, so you’re more likely to suffer the taste of disappointment rather than enjoy the heavenly sweetness. That is … unless you’re feeling lucky. ⅗.

Why was this cereal ever created? It’s a healthier version of Honey Nut Cheerios, but it tastes like stale bread. If you really wanted to buy something healthy, you could probably buy Toasted Wheatfuls for a cheaper price and it wouldn’t taste much worse than Plain Cheerios. 1/5.

Fruity Pebbles are really good without any kind of fluid complimenting it;  however, as soon as you combine them with milk, they turn soggy and the milk turns into a rainbow. They have a variety of flavors, making it  a great snack to eat without milk. 3/5.

Honey Oh’s are amazing. They’re really thin and taste richly of a syrupy, sweet, yet golden and mouth-watering honey glaze. The cereal is light and airy but also packed with flavor — like a slightly better version of Honey Nut Cheerios. The milk doesn’t make much of a difference when eating the cereal itself, but leaves a really good aftertaste. 4/5.

Easily one of the best cereals created. It’s the definition of the perfect cereal with the cinnamon adding the perfect taste. The cereal doesn’t become too soggy when mixed with milk and it tastes good no matter how you eat it. The best part — the leftover milk infused with cinnamon. No bad word has ever been uttered about Cinnamon Toast Crunch — it’s just that good. 5/5.